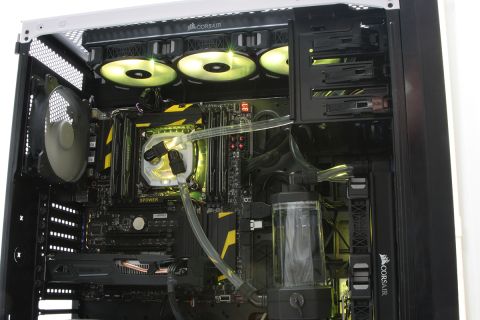 Corsair provides impressively competitive custom watercooling components and a new customization website to help you configure your next cooling loop. The prices of various parts can add up fast, but that's true of any custom setup.

A name widely known for everything from cases and closed loop liquid cooling solutions to power supplies and memory modules, Corsair sets its three sails on yet another mission: To help consumers build custom watercooling systems emblazoned with the well-known Corsair logo that can work with various cases and other custom watercooling gear. Its Hydro X components and the Corsair system (which we first saw earlier this year at Computex) is definitely worth a look if you're planning on venturing beyond air cooling or closed-loop alternatives, and you can start your build with the Corsair Hydro X interactive and intuitive custom cooling loop configurator.

In conjunction with the official launch of the lineup, Corsair sent us a literal suitcase (and a large shipping crate) packed with newly released components that are engineered from enthusiast-grade materials like copper, brass and nickel. In doing so, Corsair illustrates a breadth of quality component offerings that had previously been reserved to the world of premium watercooling brands like EKWB. Corsair’s Hydro X line also integrates with its existing iCue software and RGB lighting ecosystem, making it an attractive option for the newcomer to PC watercooling. In short – there’s a new custom watercooling kid in town and they’re prepared to help you build the cooling system of your dreams.

The CPU is a primary piece of hardware to be managed by the cooling loop of most liquid cooling systems. In our build, we utilized the new XC9 RGB block that fits Intel 2011x and 2066 sockets, and includes a mounting plate to convert to AMD Threadripper (TR4) as well.

The acrylic top of the block is trimmed with brushed aluminum and utilizes an inlet and outlet port that follows the usual G1/4" thread to allow for the most popular fittings. RGB lighting is embedded as 16 individual lighting nodes within the block, to provide internal glow and a patterned display when synced with supported lighting controllers using a pigtail lead. Corsair intends for the XC9 block to be daisy-chained to the GPU block and pump before terminating to a supported lighting controller, such as the Corsair iCue Commander Pro.

The nickel-plated base of the block comes shipped with a pre-applied layer of thermal compound. This view offers a look at the twist-lock ring system to change the mounting rings. We found that while the twist-lock for the 2011x/2066 mount seemed to have a bit of play while the block was being handled, this did not seem to be an issue for mounting or securing when it came time to do so.

Corsair's XD5 RGB pump is based on the widely-popular Laing D5 pump, which has long been considered one of the primary workhorses of custom watercooling builds.  Corsair’s version includes a custom top and RGB lighting accenting a clear, 330ml integrated reservoir.  An included set of 120mm and 140mm mounting brackets and thumbscrews allows the pump to be mounted to nearly any chassis fan mount (or even a fan itself, as we did) to make placement as universal and simplified as possible.  Included with the pump is a G1/4” thermal sensor, which can be connected to a typical 2-pin thermal sensor like the Corsair iCue Commander Pro (We’re beginning to sense a pattern here).

The pump’s RGB lighting is intended to work with other Corsair lighting controllers. Running at full speed via MOLEX power, its motor also has the ability for PWM speed control (for those OCD types).

Each XG7 block is milled to provide full coverage for the graphics card models each block supports (check fitment and compatibility, especially if you have a non-Founders Edition/Stock card or PCB) along with a coolant flow meter in the form of a paddle wheel at the edge of the PMMA acrylic top.  RGB lighting is built into the clear top for each XG7 block, as expected.

Corsair went the extra mile here, as each XG7 block ships with thermal pads and paste pre-applied to eliminate the time and dexterity required for application.  For those of us who have wrestled over the tedious trimming and placement of thermal pads prior to mounting a GPU block, this is a welcome feature.

Once you’ve soaked up all the thermal output generated from your CPU and GPU, your pump needs to move it to a heat exchanger to dissipate it to the ambient air. Corsair’s XR5 radiators are copper + brass, and are manufactured in partnership with HardwareLabs, a name known for producing some of the best-performing watercooling radiators over the years. Corsair's XR5 radiators are built with an average 16FPI fin density, while the thicker, XR7 radiators use a lower-density 13 FPI design.

The XR5 radiators are 30mm thick (XR7 are available as 54mm thick) and provide a nominal fin count for a balance of cooling performance and airflow silence.  Fan mount tabs include a backing shield that prevents long fan screws from piercing a radiator tube, a feature typically seen on most purpose-built PC watercooling radiators.  Of course, the XR5 and XR7 model lines each utilize standard G1/4” fitting ports for compatibility with other watercooling hardware, in keeping with the rest of the kit.

Keeping airflow moving over a radiator is not an easy task, and experienced watercooling aficionados will tell you that static pressure and fan speed should be evaluated with the chosen radiator to contribute to optimal airflow for the cooling system.  Two sets of Corsair ML120 Pro RGB fans were sent to us to be used, one for each XR5 radiator, and setup through the Corsair Commander Pro fan and RGB lighting controller.

After a quick download and setup of the Corsair iCue software, we were able to adjust lighting and fan RPM, set cooling curves, and see a tremendous volume of system data that includes thermal probes from our reservoir coolant temperature fitting as well as the three additional system probes that are included with the Commander Pro.

When it’s time to connect tubing to all the cooling components, fittings are a requirement.  For our testing, we stuck with flexible tubing and normal compression fittings, but we also made use of several 90-degree and 45-degree angled extensions as well. In addition, we also got our hands on a ball-valve for on/off adjustment, typically used in the draining or bleeding of a cooling system.

The hardline tubing used by Corsair is a PMMA acrylic which is resistant to higher temperatures and resists breakage. It should be noted that PETG and PMMA tubing heats and bends differently and also often require fittings designed for the type used for your build. Failure to do so can result in an incorrect seal of the tubing, fittings and O-rings.

To compliment its liquid cooling components, Corsair shipped us 2 liters of its clear XL5 coolant and a handy filling bottle for those hard-to-reach-reservoir-ports. The coolant provides inhibitors to prevent any corrosive build-up or microbial growth from causing unsightly buildup or ruin of your newly installed cooling loop.

Since our standard testing chassis is a Corsair Carbide 760T, we were able to fit a dual radiator setup using both the 360 and 240 XR5 radiators, which can easily accommodate one or even two graphics cards in the cooling loop if we opted to do so.  Using the included pump mount, we setup the XD5 mount to the front 240mm XR5 radiator to save some space.

Our loop was built from the following components, for reference and pricing total:

Corsair entered the custom watercooling scene with a proverbial big splash, and a build of this magnitude means users should budget for a watercooling component shopping cart touting an enthusiast-level price tag.

We didn’t have a GTX 1080Ti or RTX 2080Ti on hand to add to the cooling loop, but the lack of a graphics card provides us with a large CPU cooling loop that can be used as a direct comparison with other full loop options. Our Corsair build could be trimmed down if there was a real need to save some cash. Components like the Commander iCue Pro and the XF Adapter 45-degree and 90-degree fittings could be listed as ‘optional,’ although they arguably add considerable aesthetic value to the finished build.

Next Page Comparison Coolers, Testing Results and Conclusion
8 Comments Comment from the forums
Be In the Know