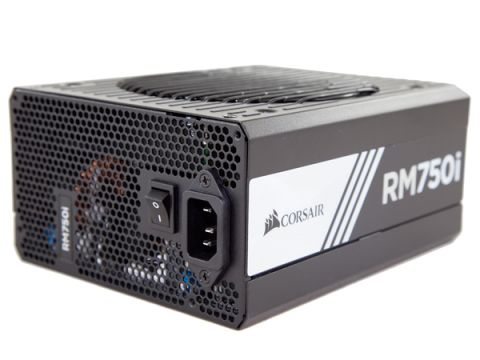 Corsair made a huge update to its still-active RM line with the new RMi PSUs, which offer great performance improvements, including an even lower noise output. We are pretty sure that the company had a very hard time achieving lower noise output than with the RM units, which are still among the most silent PSUs money can buy. The new RMi units are even competing with Corsair's own HXi line, since they are very close performance-wise and only slightly less efficient. Actually, the main difference between the RMi and the HXi PSUs (both are based on the same platform) is the efficiency certification. Considering the small gap between Gold and Platinum efficiency, we believe that the RMi PSUs will be the preferred choice for most users.

The RM750i that we evaluated today registered decent load regulation at +12V and excellent load regulation on the rest of the rails. In addition, the PSU managed to offer a significant efficiency boost at light loads compared to the older RM750 unit, while with normal loads, it stayed very close to the competition. In ripple suppression, the CWT platform is an excellent performer, and one of the key features of this PSU is the silent operation even under extremely tough conditions.

Corsair's RM line included some of the most silent PSUs available, and our noise measurements show that the new RMi units managed to take the lead even in this section. In addition, the exclusive use of Japanese capacitors, the improved digital interface that offers enhance functionality, the longer warranty period and the significant performance boost make the RMi a much better option not only compared to the older RM units, but also to comparable PSUs from other manufacturers.

It is clear that Corsair wants to dominate the PSU market, and with PSUs like the new RMi, the company is on the right path to achieve this goal. Currently, the RM750i's only direct competitor is the EVGA SuperNOVA G2 750 W, which uses the excellent Super Flower Leadex Gold platform, costs less and has an even longer warranty. However, there is a catch: The EVGA offering isn't equipped with a digital interface, and more important, it loses to the RM750i in the noise output section.

The only unit capable of facing the RM750i in both performance and noise output is the new Seasonic Snow Silent-750. However, that unit belongs to a higher category and thus costs much more. On top of that, the Snow Silent-750 doesn't offer any digital goodies. The only serious omission in the RM750i PSU is the lack of a second EPS connector, and this can cause headaches for users who want to use it along with a high-end mainboard that has a four-pin ATX12V in addition to the standard EPS socket. Users can use a Molex adapter for this, but we've found that this is not a safe option. A high-end 750 W PSU like this one should have two EPS connectors, as is the case for the HX750i unit.

Prev Page Performance, Performance Per Dollar And Noise Ratings
18 Comments Comment from the forums
Be In the Know