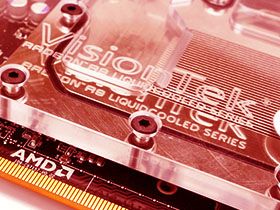 Can A Liquid-Cooled Radeon R9 290 Be Affordable?

Enthusiasts are the folks who appreciate the benefits of lower temperatures, and most of us also put high value on less noise, too. The fight between cooling performance and acoustic pollution became particularly acute in AMD’s Radeon R9 290 graphics cards. More so, even, when the company was forced to override its firmware-based fan ramp through a driver in order to deliver consistent clock rates.

Where we once saw performance variance as large as 15% from one board to the next, that “fix” still has us finding variations up to 5% caused by slight changes in room temperature.

Most of us would pay to avoid those issues, and the $400 Radeon R9 290 was supposed to be cheap enough to encourage value-minded adoption of high-end graphics hardware. But in our search for an answer to the 290’s reference cooling woes, many of us forget to ask the right question: how much would we be willing to spend on better performance and lower noise, while giving up our warranty coverage? Based on today's online prices, water block manufacturer EK thinks the answer is around $120 (add $30 for the back cover).

VisionTek does its math a little differently. On the product page of its CryoVenom R9 290, the company values your time building a water-cooled R9 290 at $100, as you also sacrifice its warranty. The marketing gets a little fuzzier as VisionTek calculates that a $120 cooler, a $30 back cover, and your $100 of time pushes the cost of a $400 Radeon R9 290 to $651.

Even if you disagree with those numbers, though, a do-it-yourself configuration with an original $400 card, the EK cooler, and the company's backplate would cost at least as much as the original $550 VisionTek CryoVenom R9 290.

Right now, some of you are probably thinking that a $550 liquid-cooled Radeon R9 290 would be one heck of a deal in a market loaded with $600 air-cooled cards, and you’d be right. Acknowledging the crazy market pricing for Hawaii-based Radeons, VisionTek admits it needs to charge more to cover cost increases on certain board components. As a result, the company recently bumped its CryoVenom up to $600 for new orders.

As of this writing, the CryoVenom R9 290 isn't available to order, though. So, there's no way for us to know if that $600 price tag is going to hold up over time. What we do know is that the cheapest R9 290s go for $550 on Newegg, so you'd still be getting $150 worth of liquid-cooling equipment and a one-year warranty at a substantial discount. But again, that's simply not something we can vouch for on a card you can't buy right now.

Current page: Can A Liquid-Cooled Radeon R9 290 Be Affordable?

Next Page CryoVenom R9 290: Meet The Card
Topics
Graphics Cards
Visiontek
Water Cooling
35 Comments Comment from the forums
Be In the Know