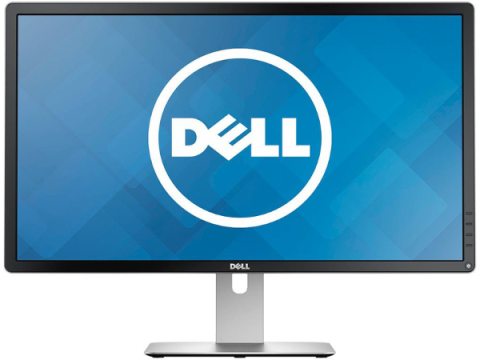 The P2815Q is a well-built and solid performing monitor that is hampered by a 30Hz refresh rate and high input lag at its native resolution. For business apps, it works well. But for gaming and entertainment, the 60Hz option at 3840x2160 is missed. If you can live with 30Hz, this monitor represents a good value.

We know from reading your feedback that enthusiasts can never have enough pixels on their desktop computer monitors. The extra density of a 4K screen means you’ll never see the dot structure; just smooth-toned detail that rivals a high-end photographic print.

Like any bleeding-edge technology, greatness does not come without cost, though. Last year’s first-generation models started out north of $3000 and are still selling for around $2000. We’ve reviewed two of those exotic 32-inch IGZO-based screens already: Asus’ PQ321Q and Dell’s UP3214Q.

Now that Ultra HD is more mature, what are the alternatives? Well, you could drop around $800 on one of the 24-inch IPS screens like the Dell UP2414Q. That gives you the extra pixels. But Windows' text is so small without DPI scaling that it’s almost unreadable unless you have the vision of a 12-year-old.

Thanks to Chi Mei Optoelectronics, we now have a 28-inch TN part available that brings the admission price of 4K down to around $500. We saw it first in Asus’ PB287Q. Today we’re checking out Dell’s version in the P2815Q

The Internet is already buzzing about the 30Hz max refresh rate of this display. It is true that at 3840x2160, you are capped at 30Hz, even over a DisplayPort 1.2 interface. The only explanation for this is Dell must be using a different scaler chip because every other monitor based on this part can hit 60Hz at its native pixel count.

For gamers, we believe this will be a deal-breaker. Thirty frames per second might be fine for movie-watching, but when you need the fast motion and response that goes along with a modern first-person shooter, even 60Hz often comes up short. Of course, you can run the P2815Q at 60Hz if you switch to 1920x1080.

On the surface, this all sounds ridiculous. Consider, however, that a UHD screen only needs to map incoming pixels two-to-one to upscale FHD content. This means there won’t be any of the artifacts normally associated with image scaling. We quickly confirmed this with our own eyes. Using the P2815Q at 1920x1080 results in a super-clean image. You’ll see the difference in high-end games, but for every other task, it just becomes a really large FHD display without any screen-door effect.

The rest of the tech is quite familiar. The panel is TN-based with white-LED backlights arrayed at the top and bottom of the screen. Color depth is 8-bits with FRC for an effective 10-bit picture. There aren’t any built-in speakers. However, there is an analog audio output for use with headphones or an external sound system.

So why consider the P2815Q? As it turns out, it performs quite well in our color accuracy tests and has some of the best screen uniformity we’ve seen to date. And it’ll put 4K on your desktop for $500. Intrigued? Let’s take a look.

Next Page Packaging, Physical Layout, And Accessories
91 Comments Comment from the forums
Be In the Know