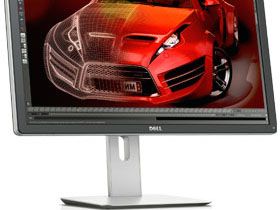 If CES was any indication, 2014 is the year of Ultra HD. Dell’s UP2414Q is now the third 4K screen we’ve had the opportunity to test in as many months. And our experience thus far suggests that monitors with 3840x2160 resolutions are still ahead of the rest of the supporting ecosystem.

Gamers anticipating their favorite titles in the lush detail offered by 4K still need to consider the cost of at least one ultra high-end video card. And they need the right display outputs if they hope to achieve a 60 Hz refresh rate. Anything faster necessitates settling for 1920x1080 (or a modded QHD monitor). Plus, enthusiasts seeking out the fastest screen response and lowest input lag have to turn to TN-based panels. The AH-IPS technology we find in Dell's UP2414Q is still slower.

The company knows this, of course. So, for its first-generation Ultra HD products, the focus is on graphics professionals and photographers. Rather than trying to emphasize speed, the main purpose of this 24-inch (like its 32-inch big brother) is rendering accurate color in both sRGB and Adobe RGB gamuts, while providing a sharp image with no visible pixel structure.

When we first started testing wide-gamut monitors, we lamented the fact that you couldn't choose between gamuts. If a panel can natively do Adobe RGB, then it is theoretically capable of rendering any other gamut within that triangle. Asus delivered the functionality we were looking for in its PA279Q (Asus ProArt PQ279Q Monitor Review: 27-Inch, Wide-Gamut, QHD). And Dell includes it in the Ultra HD UP3214Q.

At first glance, it's tempting to think of the UP2414Q as a UP3214Q that was zapped with a shrink ray. As you’ll see in the coming pages, that is largely true. The OSD is identical, and so are the chassis and trim.

But the similarities end there. Whereas the 32-inch screen employs a white-LED IGZO panel from Sharp, the 24-inch monitor is built around a GB-r-LED part from LG. This is one of only two 23.8-inch Ultra HD pieces currently made by LG, and the only one that offers the wider Adobe RGB color gamut. We tested one other GB-r-LED-based display recently, the above-linked Asus' PA279Q. Here’s a quick technology refresher, though:

Rather than the white LEDs found in most LCD monitors, a GB-r-LED backlight consists of green and blue diodes coated with a red phosphor. The net effect is that the three primary colors' spectral peaks are pretty much even. With white-LED, blue's spectral peak is much higher, so software and the panel's color filters must intervene to achieve the correct balance. A GB-r-LED panel is more accurate natively, rendering software and the color filter layer less critical. You get the added benefit of the wider Adobe RGB gamut, too. It's  more expensive to manufacture than W-LED, but less so than the rarely-seen RGB-LED.

Dell includes factory calibration with its UP2414Q, guaranteeing color and grayscale errors of less than two Delta E and screen brightness uniformity of no more than two percent deviation. Each monitor comes with a data sheet showing the results for that specific sample. The UP3214Q exceeded its factory measurement data in our tests. Where does that land it relative to the competition? Read on!

Next Page Packaging, Physical Layout, And Accessories
22 Comments Comment from the forums
Be In the Know