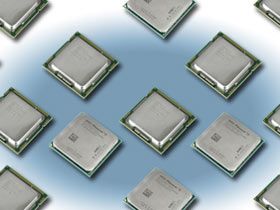 At least on the desktop, dual-core processors rarely helped bolster performance when they were first introduced. Most mainstream apps simply hadn't been optimized for multiple cores; that sort of technology was principally enabled in the server and workstation space. You had multi-socket motherboards with single-core chips cranking on complex problems in parallel. But games were almost exclusively written to run on a one core.

Programming with threading in mind isn't easy, and it took developers years to adapt to a world where CPUs seemed destined to improve performance through parallelism rather than then 10 GHz clock rates Intel had foreshadowed back in 2000. Slowly, though, the applications most able to benefit from multiple cores working in concert have been rewritten to utilize modern hardware.

Want proof? Just have a look at our benchmark suite. We test something like two pieces of software that are still single-threaded: Lame and iTunes. Everything else, to one degree or another, is threaded. Content creation, compression, and even productivity apps tax the highest-end four- and six-core CPUs.

Games, on the other hand, have taken longer to "get there." With a primary emphasis on graphics performance, it's not surprising that single-threaded engines still exist. However, spawning additional threads and utilizing a greater number of cores allows ISVs to implement better artificial intelligence or add more rigid bodies that can be affected by physics.

Increasingly, then, we're seeing more examples of games exhibiting better performance when we use quad-core processor. They're still the exception though, rather than the rule. And that's why the great single-threaded performance of Intel's Sandy Bridge architecture (and later Ivy Bridge) dominated most of our processor-bound game testing. Back in the day, dual-core Pentiums went heads-up against quad-core CPUs from AMD, and came out in the lead.

It's now clear that gunning for higher and higher clock rates is not the direction AMD and Intel are going. They're both building desktop-oriented CPUs with as many as four modules (in AMD's case) or six cores (in Intel's). In turn, game developers continue getting better about utilizing available on-die resources. We're clearly at a point where you need at least a dual-core CPU to enjoy today's hottest titles, if for no other reason than sticking with a single-core chip would put you about eight years back in processor technology. But is there a reason to skip over the dual-core models and jump right into the world of gaming on a quad-core CPU?

That's what we're hoping to answer today, and we have a new tool to help us.

Next Page Introducing A New Test: Frame Time Variance
276 Comments Comment from the forums
Be In the Know