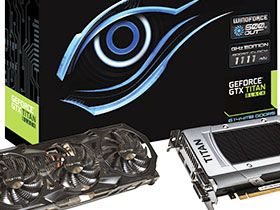 A GeForce GTX Titan Black You Modify Yourself

We didn't review Nvidia's GeForce GTX Titan Black when it launched. The company didn't see fit to sample press. And understandably, really, since the Titan Black is largely the same as a 780 Ti with 6 GB of memory and the GK110's full FP64 performance. GeForce GTX Titan Black does sport slightly more aggressive reference clock rates. Its base frequency is 889 MHz to the 780 Ti's 875 MHz. Typical GPU Boost is stated at 980 MHz versus 928. But they both sport similar coolers, display outputs, and graphics card power ratings.

Take a look over at Newegg, and you'll find an out-of-stock Asus model matching Nvidia's specification, an out-of-stock EVGA board at the same price point, but overclocked slightly, and a water-cooled EVGA card selling for $300 more and boasting an even more aggressive overclock. Really though, it's hard to see the value in a GeForce GTX Titan Black at $1400 when Radeon R9 295X2s are selling for $100 more.

Gigabyte takes a somewhat different approach to its GeForce GTX Titan Black GHz Edition (how's that for a mouthful?). The company hits the same 1006 MHz base and 1111 MHz typical GPU Boost frequencies as EVGA's $1400 Hydro Copper Signature card. But it does so with air cooling. Pop the top on the packaging and you'll see that Gigabyte ships you a reference Titan Black, per Nvidia's requirements. However, you also get the components needed for a built-it-yourself adventure.

Apparently, Gigabyte went with the old adage that rules are meant to be broken (or, in this case, bent really far). You see, Nvidia doesn’t allow its partners to modify the reference cooling solution, so Gigabyte decided to send the modified cooler along for you to install yourself on the already-overclocked graphics card.

You can still expect to pay dearly for the privilege of owning Gigabyte's take on the Titan Black (it's currently available in Europe and Asia; we're waiting to hear back from Gigabyte on whether it'll ever show up in the U.S.). At least you also get the thrill of tearing the top off of a flagship graphics card and replacing its thermal solution, though. Our aim today is to figure out if the operation is worthwhile.

First, we'll take a peek into the pricey box. Gigabyte provides an abundance of opulent accessories.

In addition to the reference GeForce GTX Titan Black, we find an HDMI cable, a mouse pad, two four-to-six-pin power adapters, a VGA adapter, a driver CD, and the cooling kit that caught my eye to begin with. Gigabyte’s new WindForce 600 cooler employs a number of changes that we'll dig into.

Current page: A GeForce GTX Titan Black You Modify Yourself