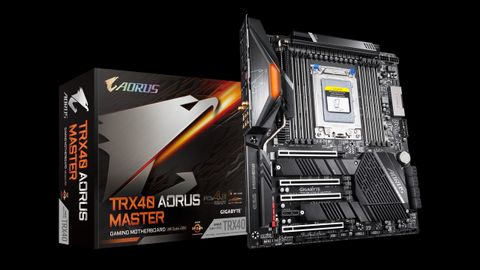 Gigabyte's EasyTune helps users adjust CPU frequency and voltage from within Windows, but its AutoTuning algorithm merely produced the same 4.00 GHz fixed frequency as its included overclocking profile. And, that frequency crashed our CPU under Prime95 even when we tried using the lower-stress “large FFTs” setting.

Consuming the right edge of the user’s screen, Gigabyte’s Hardware Monitor can be launched from an icon within EasyTune. We split the image and put the halves side-by-side to show all the readings in a minimal amount of space.

Clicking the “return” icon on Hardware Monitor doesn’t return you to EasyTune, but to Gigabyte System Information viewer. Be aware that this program forces users to sit through a lengthy fan tuning session on its first launch, but it also stores those values to quicken consecutive launches.

Gigabyte RGB Fusion did not detect our memory’s RGB controller, even though the version equipped for the company's latest Intel X299 board did. The program has the unusual feature of schronizing flash rates between all detected devices, but doesn’t offer many multi-color schemes.

From its Advanced Mode GUI, Gigabyte’s TRX40 Aorus Master allows users to configure most of the overclock settings available through AMD’s 3rd-gen Ryzen Threadripper CPUs.  We found that the board sent around 1.354V to the DIMMs at its 1.340V DRAM Voltage setting.

A brief monitoring menu is shown to the right of its controls.

The Advanced Memory Settings icon brings up a submenu with SPD Info and Memory Subtimings submenus. Primary and secondary timings are both addressable.

Since none of today’s HEDT processors can overclock at all loads beyond their default highest boost clock for light loads, we’re stuck presenting multiple so-called “max load” configuations. AIDA64 presets a light-enough load that our CPU can stay under 100° (Celsius) using 1.35V, but we had to drop our voltage to 1.20V to keep the CPU cool under Prime95.