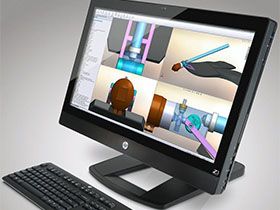 What comes to mind when you think of an all-in-one desktop or workstation? A low-power CPU? Maybe even a mobile-oriented processor or ARM-based SoC? Integrated graphics, almost certainly. Or maybe a mobile GPU with severely limited upgrade options, at best. System memory is either soldered-down or in a SO-DIMM form factor, right? And storage is limited to 2.5" drives, starting with inexpensive notebook disks and topping out with SSDs. But as power users, regardless of all other options, we have to be almost certain that all-in-ones aren't serviceable.

In most cases, you'd be right on all accounts. But HP's Z1 AiO defies those stereotypes. Yes, you read that correctly: this is an all-in-one workstation. The Z1 is a different kind of machine, aimed at a very different market than most other all-in-ones (specifically, the ones from a certain fruit-named competitor).

Note that this is a first-generation Z1, and not the second-gen model launched in February. (Update: An HP representative let us know that the first-gen Z1 is no longer available; it has been replaced completely by the Z1 G2). We'll talk about what makes each version unique as we go through the speeds and feeds.

The back of the Z1 features a brushed-aluminum panel, matching the industrial motif of most other Z-series workstations. Unfortunately, the edges protrude slightly, so if you aren't careful, the aluminum will scratch other objects. Although the metal facade does make the enclosure more resilient than other all-in-ones we've handled, it also adds to the system's overall weight. Our test sample weighs in at 47 pounds as a result. Sure, that seems excessive. But it's still less than most pedestal-based workstations and separate 27-inch displays together.

The base attaches to a VESA mount, so you could conceivably also secure it to a mounting arm with enough strength to hold the chassis. To simplify your search, HP offers a list of arms able to support the Z1. There's a good chance you won't even need to mount the workstation like that, though, since the Z1's base is fairly flexible. It offers 100 mm of height adjustment, five degrees of forward tilt, and 30 degrees of tilt the other direction.

In addition, the Z1 can be reclined fully onto its base. Two latches on the underside of the machine allow the display panel to rise, held in place by a hydraulic support arm and allowing the machine's internals to be accessed. The second-gen Z1's base is slightly different; it can be pivoted into a serviceable position more easily.

In addition to an optical drive, the right side of the unit has the power button (top), media card reader, FireWire port, two USB 3.0 ports, and the microphone and headphone jacks. The second-gen Z1 lacks the FireWire port and has an option to replace the optical drive with a Thunderbolt 2 module.

Underneath the back of the machine is where most of the remaining ports hide. Four USB 2.0 ports, gigabit LAN, line in and out, optical S/PDIF, and DisplayPort 1.1 connectivity that operates bi-directionally (yes, once this product outlives its usefulness as a system, it will still make a perfectly good monitor).

While a plethora of ports is always appreciated, hope that you don't have to connect anything to them while the machine is in its normal operating position; locating and identifying them can be quite difficult.

Among the biggest features of the Z1, one that differentiates it from competing systems in the same segment and even its successor, is its display. The Z1 sports a DreamColor 2560x1440 IPS screen. It's a true 8-bit panel, and HP employs FRC (Frame Rate Control) in the same way that other manufacturers do in their 6-bit displays to get a closer approximation of 8-bit. In this case, HP uses FRC to get better color bandwidth than 8-bit. The screen is addressed by Windows as a 30-bit display, requiring non-standard drivers that allow it to toggle through various color spaces. HP's second-gen Z1 has a regular IPS display with an optional matte finish or a glossy, 10-finger, touch-enabled version. HP states that the DreamColor panel will "eventually" become available in this workstation's follow-up as well.

Current page: The Looks Of An All-In-One...

Next Page ...The Performance Of A Workstation
18 Comments Comment from the forums