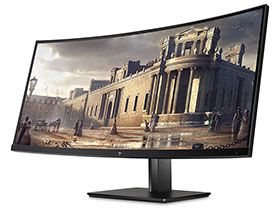 While gamers will decry the HP Z38c’s lack of FreeSync support, this display is clearly meant for the workplace. Getting work done takes on a whole new meaning on a monitor this large. Once you try it, you won’t want to go back to a "tiny" 27” flat panel. The Z38c comes highly recommended.

When curved ultra-wide monitors first appeared a few years ago, many users wondered if they were a solution to a problem that didn't exist. That was until gamers got hold of them. Now, they’ve become the display of choice for enthusiasts thanks to their large size and immersive wraparound effect. These screens provide an attractive alternative to the two- and three-panel setups commonly found on the desks of those who can never quite have enough screen real estate.

LG first conceived these screens as business-class displays, and they ertainly work well in that role. You an can open three or four documents side by side, or view a large spreadsheet with 30-40 columns on the screen, before you have to sroll. They’re great for photo editing too, as you can keep the workspace large and leave more tool palettes open. No matter the task, fewer mouse clicks and less head turning and scrolling is always a good thing.

Today, most 21:9 curved monitors include impressive gaming features like adaptive-sync, fast refresh, and blur reduction. But HP, who generally leave the gaming-focused displays to its Omen brand, is taking "business-class" displays to a new level with its Z38c. This massive 38” screen sports a 2300R curve, 3840x1600 pixels refreshed at a steady 60Hz, and factory-tuned color. It’s also one of the best-built monitors we’ve ever reviewed. It may not have the gaming-focused features that some will crave, but for those looking for massive screen real estate for productivity purposes, it's certainly worth considering, provided your budget can handle the $1,199 asking price.

The HP Z38c is all-business, all the time. Despite having HDMI 2.0, DisplayPort 1.4, and USB-C inputs, it does not support AMD's variable-refresh FreeSync tech. It operates at 60Hz and features a factory-calibrated sRGB native color gamut. Color depth is 10-bits, achieved with Frame Rate Control. If you’re concerned about banding, don’t be. Only overly-compressed content will show artifacts on this monitor.

The HP Z38c's curve has a 2300mm radius, which is just right for this immense screen. It occupies nearly three feet of desktop width, but is only a little deeper than a flat monitor. The Z38c's panel is AH-IPS, and HP claims a contrast ratio of 1000:1. A factory-provided data sheet showins test results for each monitor in its default sRGB color mode. OSD calibration is possible in the Custom mode (more on that later).

The Z38c has just about everything a serious business user could want. It’s easily large enough to to take the place of multiple monitors, while eliminating the unsightly between-screen bezels of a multi-screen setup. It looks great on the surface--and on our desk--but as always, we want to know how it performs.

We’ve tested a couple other 38” curved ultra-wides recently, but neither is as substantial as the Z38c. Though no larger than any other 38-incher, HP's model is heavier, and comes in the largest carton we’ve seen yet. To call it well-protected is to understate the matter. Serious effort would have to be made to damage the display while in its box. Our sample received extra care courtesy of an additional double box and foam around the main package. When it arrived, we thought the box contained two screens.

Inside, you’ll find rubbery foam, which we love because it doesn’t crumble all over the floor, and it absorbs vibration better than styrofoam. The base and upright ship as one unit, and the panel just snaps on with no need for tools or fasteners. A standard IEC power cord feeds the internal power supply, and cables are provided for USB-C, HDMI, and DisplayPort. If you want to use a monitor arm, a metal adapter is included that provides the necessary 100mm VESA mounting lugs. This allows the user to remove the panel without tools, using the same snap-on feature as the factory stand.

The first photo makes the Z38c stand look diminutive, but make no mistake: It’s massive. We were amazed at its weight when unpacking, so we plopped it on a scale. The stand alone weighs nearly 11 pounds--more than some complete monitors! The upright is solid metal ,made from two large rails. The base has a steel core covered by heavy plastic. Once the monitor is assembled, it weighs just over 30 pounds. Build quality is among the best we’ve seen and is easily equal to what we’ve seen from NEC, which has long been our gold standard. This monitor is a professional-grade tool, and clearly built to last in a busy work environment.

The screen has a thin bezel of just 11mm around the top and sides, and a larger 22mm wide trim piece across the bottom. Only a subtle HP logo breaks the smooth surface here. When powered down, the panel appears borderless at a glance. Control buttons are at the bottom right and are nearly flush with the surrounding plastic. They click firmly and positively. To prevent accidental shut-downs, the power key is larger and separated from the others. A tiny white LED indicates power and standby modes.

The 2300R curvature falls rcomfortably between subtle and extreme on a monitor this size. There is no hint of image distortion, yet the panel wraps ideally around the user. It’s the perfect form factor for working with large spreadsheets or multiple documents. In our opinion, it’s superior to a two- or three-monitor setup. The side profile is understandably deep, with a four-inch panel depth. On the left of the component bulge, you’ll find USB 3.0 and USB-C ports. The latter provides up to 65 watts of power to compatible devices--like USB-C-powered laptops.

The back follows the curve of the front, and has a large depression for the upright’s attachment plate. And there's generous grille-work across the top to keep things cool. We observed no more than gentle warmth emanating from the Z38c, even with brightness set to maximum. There are no speakers here, so audio will have to come from headphones or an external solution. And for those looking for a truly tidy big-screen desktop experience, the Z38c can easily be transformed into an all-in-one PC with the addition of a small desktop box from HP, as pictured in the second-to-last photo.

The down-facing input panel sits tight against the back of the panel to aid in cable management. If you have chunky connectors, they might not fit. We had no trouble with our aftermarket cables, however. Video is supported by one each of HDMI 2.0 and DisplayPort 1.4. Despite being one of the few monitors available with the latest version of DisplayPort, the HP Z38c does not support FreeSync, nor does it accept signals higher than 60Hz. It will process 10-bit color, however.