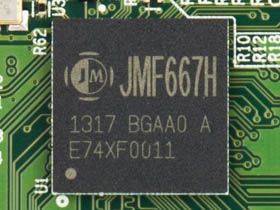 JMicron Resurfaces With An Updated Controller

JMicron has been in the SSD silicon game for years as part of its fabless design business. The trouble is that the company doesn't have the best reputation amongst enthusiasts as a result of problematic controllers from its past. But the situation could very well change if the JMF667H processor we're looking at today is on its best behavior. After all, I can't imagine the company would have sent me a handful of reference-class SSDs if the silicon wasn't capable of redeeming JMicron.

Last year, I had the opportunity to check out Silicon Motion's reference platform with its four-channel SM2246EN (Hands-On With Silicon Motion's New SSD Controller). That solution was an excellent complement to the Marvell- and SandForce-based offerings of the storage world. For 2014, I'm doing the same thing with JMicron's own four-channel design, and adding a twist I'll introduce shortly.

Why four channels and not eight? Efficiency is one key motivator. Fewer channels facilitate a smaller ASIC, which can, in turn, be more power-friendly. In storage, that's a boon in the enterprise and mobile spaces, but less of an issue on the desktop. Of course, there are some big eight-channel designs too, including Marvell's newer 9189 and Intel's own SATA controller featured prominently in drives like the SSD 730. They tend to use more juice and enable higher performance. But as with any job, it makes sense to use the right tool, and it'd be hard to deny the effectiveness of these more modern four-channel implementations.

Apparently, JMicron is keeping the eight-channel designs tucked away for PCIe-based SSDs, while SATA-attached drives get the company's more mainstream platform that includes the PCB, processor, and firmware. It's a flexible business model that lets drive vendors pick and choose the pieces they need. Silicon Motion made that a key part of its strategy as well. Buy the controller and write your own firmware, or get everything in a turnkey package.

Worldwide, there are a number of SSD brands we don't see in the U.S. Someone has to sell them processors too, and they're filling the gaps between SandForce launches using Marvell, Silicon Motion, and now JMicron logic.

Built on a 55 nm TSMC process, the ARM-based JMF667H supports up to 512 MB of DDR3 cache and eight chip enables per channel. As a consequence, most drives adopting the 667H will fall into the 128 to 512 GB range. Naturally, the proliferation of 128 Gb NAND is a big deal, and the 667H supports most NAND interfaces, in particular 20 nm IMFT and SanDisk/Toshiba's 19 nm A19 Toggle-mode flash.

But with just four channels available, the architecture does tend to limit performance somewhat, especially in measures of small random operations.

We do get the addition of DevSlp, which we'll test later. Beyond that, there aren't many headline-grabbing features.

Here's what's really cool about today's exploration: for perhaps the first time, we have the chance to test one platform using different kinds of flash, truly isolating NAND as a variable with JMicron's newest controller. The company sent along four different configurations, allowing us to examine the JMF667H with L85A from Intel (20 nm, 128 Gb die), L85C from Intel (20 nm, 128 Gb die), and Toshiba's A19 (19 nm, 64 and 128 Gb die). The exercise should be illuminating, since it's often difficult for us to isolate the impact of a given controller architecture compared to the flash it's attached to.

It should go without saying that these are samples built by JMicron for internal use, and you can't actually go out and buy any of them. Not that you'd want to; they aren't covered by a chassis or protected by a warranty. But customers of branded memory products like Transcend are making drives, and you can buy them right now.

And so we're taking a moment to reacquaint ourselves with a seldom-mentioned name in the storage business. We suspect the company is going to have big things going on in the future. But as attention shifts from SATA to SATA Express and PCIe, we think the time is ripe for JMicron to strike with controllers to match the times. First, it has to make it though our gauntlet of impressively-constructed tests.