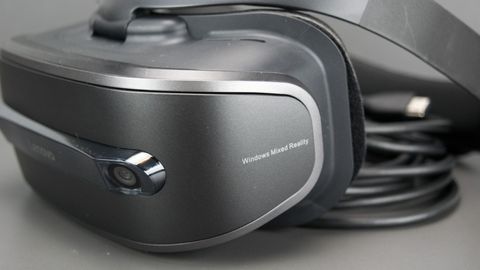 We would love nothing more than to provide objective test results of the Lenovo Explorer Windows MR headset (and every other VR HMD, for that matter). However, analyzing the performance of VR headsets is easier said than done.

In the past, we experimented with 3DMark’s VRMark tool to test motion-to-photon latency, but 3DMark discontinued that project before retail VR headsets hit the market. Basemark also created a tool called VRScore that analyzes motion-to-photon latency, and we would be happy to use it for our tests. However, VRScore doesn’t support Microsoft’s Windows Mixed Reality platform, and it’s possible that it never will. We reached out to Basemark when we received our first Windows MR headset, and Arto Ruotsalainen, Basemark's co-founder and CEO, told us that the company cancelled Windows MR support.

“Regarding Microsoft VR headsets, we had to, unfortunately, cancel the support as neither we, nor our current partners, were able to get enough interest from Microsoft to help us out with the integration,” said Ruotsalainen. “VRScore PC 1.1 will have updated Oculus, HTC Vive, and OSVR SDKs.”

Nvidia also makes a performance evaluation tool. Nvidia’s FCAT VR pulls performance metrics directly from the rendering pipeline, and it supports Steam VR and the Oculus runtime. We evaluated this headset before FCAT was available, but didn't publish our review immediately because of the arrival of the HTC Vive Pro and Samsung Odyssey. For a better sense of how a WMR headset performs in terms of FCAT data, see our review of the Samsung HMD, which does contain some. Note, though, that the Samsung headset has slightly higher-resolution displays. So the Lenovo headset should be less demanding on your graphics card.

One of the biggest advantages of the Windows MR platform compared to Steam VR and Oculus Rift is its low system requirement threshold. Where the Oculus Rift and HTC Vive require a GTX 960 or better to operate, Microsoft’s platform supports Intel’s integrated HD Graphics. When we tested Acer’s Windows Mixed Reality Headset, we used three different PCs to evaluate multiple performance tiers. We used an Intel Core i7-5930K with a GTX 980 Ti to represent our high-end build. Our mid-tier system was an older Intel Core i3-4330 with a GTX 950. And we used an Intel Core i5-6400 with integrated HD Graphics 530 to verify that you can, in fact, skip the discrete GPU and operate a Windows MR headset.

The specifications of the Lenovo Explorer closely match those of the Acer Windows Mixed Reality HMD, so we didn’t see the value in describing the experience of using the Lenovo Explorer with the same machines again. We completed our Acer headset evaluation using desktop computers, which aren’t easy to pick up and haul around. This time, we added a laptop to the mix to evaluate the portability of the Windows MR platform and the Lenovo Explorer headset. Lenovo graciously provided us with a Legion Y720 gaming laptop along with the headset for our evaluation. The Y720 is a full-fat gaming laptop featuring an Intel Core i7-7700HQ with a Nvidia GTX 1060 discrete GPU.

Microsoft’s mixed reality platform is the only VR platform that doesn’t require a discrete GPU. The company worked with Intel to ensure that basic Windows MR functions would work with Intel HD Graphics. We weren’t impressed with the low refresh rate of the headset when an integrated GPU is powering it. The feature works, and if you needed to use it occasionally, it would be fine. However, we wouldn’t recommend using an iGPU for long-term VR use.

That said, AMD recently released its Ryzen- and Vega-powered APUs, and we are highly curious to see if a Ryzen 2400G can deliver a better experience than our Core i5-6400 system. Unfortunately, the timing didn’t work out for the Lenovo Explorer, as we had to return our review sample before we could get a Ryzen APU to the VR lab. We have more Windows MR headsets to evaluate, so we’ll explore that idea in a future story.

The Lenovo Explorer headset offers effectively the same experience as the Acer Windows MR headset. As such, we spent most of our time with the Lenovo headset with it connected to the Y720 laptop. We were pleasantly surprised to see how well the two devices complemented each other. A Lenovo Explorer headset and a gaming laptop make a fantastic portable VR solution.

The Lenovo Explorer headset is a breeze to set up and configure. Simplicity was one of Microsoft’s primary goals for the Windows Mixed Reality platform, and in that regard, the company certainly succeeded. Windows MR headsets don’t require external sensors or base stations like the Oculus Rift and HTC Vive. As such, you need only plug in a single HDMI and a single USB cable, and you don’t have to worry about running wires around your room. The single USB and HDMI connections also make these headsets practical to set up anywhere.

Windows 10 should automatically detect that a Windows MR device is present and proceed to install the necessary drivers and the Mixed Reality Portal. Your computer must have the Windows 10 Fall Creators' Update installed before it will detect the headset. However, unless you’ve forcibly prevented updates, your PC should already have it. When the driver installation is done, the Mixed Reality Portal should launch automatically.

Once you’ve paired the controllers, you must set the borders of your play space. Like the HTC Vive and Oculus Rift setup, Microsoft’s Windows MR platform supports room-scale and standing configurations. If you choose standing-scale VR, you don’t have to dictate your safe play area, but you do have to define the parameters for the room-scale configuration.

When you set up the play space for an Oculus Rift or an HTC Vive, you must trace your play area with one of the controllers while the external tracking system keeps track of its position in the room. Because the Windows MR headsets don’t have external cameras, tracing your space with a controller wouldn’t work. As such, you must carry your HMD around the room to let its cameras trace the room. You must take care always to keep the headset facing your host computer while you trace the room.

The first time you run the setup procedure, the Mixed Reality Portal will run you through an orientation process, which teaches you the basics of using the controller, interacting with Cortana, and navigating the menus and environment.

The Windows MR platform can store multiple room profiles. If you take the system to another room, or a friend’s place, you won’t need to recalibrate your room boundaries when you return to the previous location.