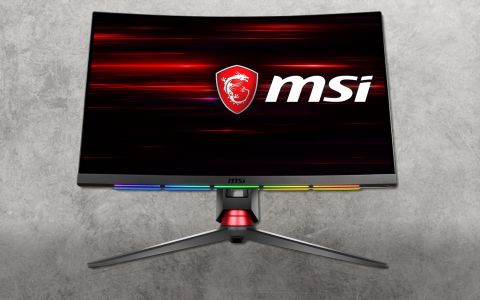 We describe our grayscale and gamma tests in detail here.

We don’t have much to show here since the best mode for the MPG27CQ is, in fact, the User preset with no adjustments. We measured the default Normal color temp preset to generate the first chart. The preset showed a tiny bit of extra blue, but none of the errors were truly visible, so we’d consider this very good out-of-box performance.

When we selected the Customize color temp, brightness immediately dropped by more than half and gamma became extremely light. If you want to turn this excellent VA panel into a mediocre TN (twisted nematic) one, that is the way to do it. Our adjustments yielded worse results with obvious green errors in the darkest steps.

This is the first monitor we’ve ever reviewed where we recommend avoiding calibration.

The best number we measured was the default 2.46dE. That is a decent out-of-box result, but a slightly below-average calibrated one. The MPG27CQ could use a bit of tweaking at the firmware level.

Our unusual results extended to gamma tracking as well. The MPG27CQ’s trace shows a hump at 10%, which indicates insufficient luminance at that level. Indeed, a 0-10% step pattern shows crushed detail at the bottom. In other words, the bottom three steps are a single shade of black. You can fix this with the Black Tuner control, but that will change gamma in other areas and is a very coarse adjustment. We suggest leaving it alone as we had no trouble seeing all the shadow detail in the content we watched or games we played.

The Customize color temp created an odd gamma curve (seen in the second chart) that is too dark at the bottom and too light at the top. It removed much of the image depth and made things look flat and washed out. Again, we recommend sticking with the Normal preset.

The MPG27CQ’s gamma tracking averages reasonably close to 2.2. A 3.18% deviation indicates an average value of 2.13. But the variations put it in last place among the comparison group in the range of values tested. This is another area where MSI might be able to offer a firmware tweak without too much effort.

We were concerned the MPG27CQ’s gamma performance would adversely affect color tracking. But happily, that was not the case. It followed the targets well and managed its extra gamut volume properly.

As we said up front, this is a DCI-P3 monitor. But since it doesn’t support HDR or Ultra HD in any other way, how will it handle sRGB material? You can see from our gamut charts that it simply offers a bit of extra color at the sRGB target points until reaching the perimeter of the triangle where the 100% measurement moves outside. In the DCI-P3 chart you can see that the MPG27CQ does not attempt to hit the inner saturations of that specification. This is a good thing because it means that most material, which exists inside the triangle, will look more natural than overblown. Only the very brightest colors will seem off. And we expect most users won’t complain.

The last two charts show our calibration attempt. It didn’t change color tracking or luminance in any significant way.

The MPG27CQ’S 2.29dE average color error is reasonable for a gaming monitor, but the other screens in the comparison group offer slightly better accuracy. However, the MPG27CQ has one of the largest overall gamut volumes in the group. The AOC monitor is a bit of anomaly because it has multiple gamut modes, neither of which can hit 100% of their targets. Both MSI monitors offer a single gamut that greatly exceeds sRGB and covers over 80% of DCI-P3. Color-critical applications are outside this monitor’s design intent, but if you want rich and saturated hues for your games and movies, there are few better displays in this price range.