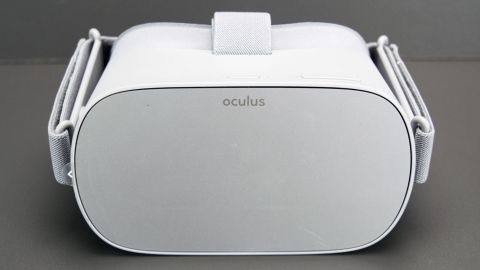 With a user experience that's better than any mobile headset and a price that almost anyone can afford, the Oculus Go delivers a great VR experience for the money, no smartphone or PC required.

We've been tracking the best Black Friday tech deals and have discovered that the Oculus Go is now cheaper than ever. It's currently on sale for $150 at Amazon, $50 off its regular price.

Imagine going to a fancy burger joint and being asked to bring your own bun? That's what the VR market has been like up until now. No matter how much or little you spent, you either needed a high-end PC or a premium smartphone to use the best VR headsets. Enter Oculus Go, a standalone VR system with its own Snapdragon 821 processor and everything else you need built-in.

The Oculus Go isn’t going to replace the PC-connected room-scale-capable systems like the Oculus Rift, HTC Vive, and Windows MR headsets. But the standalone device offers better performance and a more convenient form factor for experiencing VR content than smartphone-powered headsets such as the Google Daydream View and Samsung Gear VR.

The Oculus Go has a functional design language that doesn't stand out for being either beautiful or ugly. The device is a light shade of gray with very little contrast. The body of the visor has a smooth plastic finish, while the faceplate is made of a dull aluminum which acts as a heatsink for the SoC and surrounding components. The fabric surfaces are a slightly different shade of gray. The only real contrast is the black face cushion that surrounds the lenses.

The Go borrows some design elements from the Rift (such as the shape of the faceplate and how the head strap attaches to the visor). However, the construction of the two headsets is markedly different. For instance, the Go doesn’t offer spatial tracking, so it doesn’t have embedded sensors.

On the top the headset, you’ll find a pair of volume adjustment buttons and power button with an LED indicator light that shows when the device is charging, paired via bluetooth or powered on. The left side houses a micro USB port used for charging the device, and a 3.5mm audio jack to plug in a headset.

The headset features internal speakers and a microphone, so you don’t need headphones to use the device, but Oculus recommends using a headset for the best voice communication. Oculus offers the Go headset with 32GB or 64GB of internal storage. Our sample came with 32GB.

The Oculus Go features a 3-point head strap, which is made of a fabric. Inside, a foam rubber cushion fits snugly against your cheeks and forehead to seal off light from the world around you. The nose space doesn’t have a cover, so you can still see the real world through the slit if you look down.

The Go has a novel solution for glasses wearers -- a spacer, which you can install under the foam cushion to push the edges of the foam out and give you a few millimeters of extra clearance for corrective lenses. I don’t wear glasses, but I deferred to a friend who does to test the spacer. While he has trouble wearing the Rift, the Go fit over his glasses with ease.

For people who don’t want to wear their glasses with a headset at all, Oculus is introducing a corrective lens accessory, which you can slip over the Go’s lenses to make it a prescription VR headset. Oculus said the corrective lenses will be available for Rift owners as well.

Speaking of the lenses, they are significantly better than what you'll find in the Rift. Oculus told us that it put considerable effort into developing the “perfect lens” for VR, and while we’re not convinced that they are perfect, they do provide a much clearer image than the older design.

The Oculus Go lenses are curved, Fresnel-style lenses like those in the Rift headset, but they produce much less lens flare distortion. The new lens design features a somewhat triangular shape, instead of the round with one flat edge design we usually see in VR headsets.

Display Panel: High-Res, But Not as Good as Rift

The Oculus Go offers a marginally higher resolution than the Oculus Rift headset, but to call it superior would be somewhat disingenuous. The Rift features 2,160 x 1,200 pixels spread across two 90Hz OLED display panels. The Go features a single 2,560 x 1,440 fast-switch LCD panel that operates at 60Hz or 72Hz, depending on the application.

We suspect that the lower refresh rate is a symptom of the available processing power and not a limitation of the panel technology. To keep the costs down to a palatable level for the mass market, Oculus chose a dated Snapdragon 821 processor, which is the similar to the chip found in the two-year-old Samsung Galaxy S7.

Oculus also developed features that enable it to squeeze even more performance out of the aging hardware, such as Fixed Foveated Rendering, which enables developers to push high-fidelity graphics to the sweet spot of the display and lower fidelity graphics in the periphery to reduce the GPU load. The company also created processes such as Dynamic Clock Speed Adjustments, which lower the clock speed of the SoC when it's not in demand to help preserve battery.

The Oculus Go features an internal 2600mAh Lithium-ion battery, which provides between 1.5-2-hours of continuous gaming, or approximately 2-2.5-hours of video content. In our experience, Oculus’s runtime ratings are accurate. I squeezed a little more than 2 hours out of our headset with a combination of gaming and video, and got nearly 3 hours out of it while doing nothing but watching Netflix.

It takes approximately 3 hours to charge the Oculus Go fully with the provided charger. The instruction guide says not to charge it with other chargers, including portable battery backups. You also should not charge the headset while it’s on your face.

The Oculus Go package includes a motion controller, which features a large trigger button, a trackpad for your thumb, an Oculus menu button and a back button. Like the Daydream VR or Gear VR controllers, it features 3-degrees of freedom tracking, which allows you to point in any direction, but it doesn’t have any depth-sensing capabilities so you can’t reach into the virtual world.  Similar to the Daydream platform, the menu button on the controller enables you to recenter your view at any time.

The motion controller is an odd shape, but felt comfortable in my hand. I wasn't even tempted to put it down while watching video content.