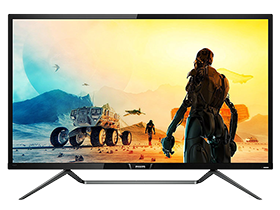 VA panels don’t have quite the off-axis quality of good IPS displays, but the 436M6 is one of the better screens we’ve seen. At 45 degrees to the side, light falloff was around 30 percent, and the color shifted a bit to red. Gamma stayed solid though, which means there was no loss of detail or depth. From the top, all the brightness steps could be clearly seen, but brightness output was down at least 50 percent. This is better-than-average performance among VA monitors--a good thing considering the Philips’ large size.

We noticed a few issues at the bottom of our sample’s screen. The lowest zones showed visible hotspots when viewing a black field pattern in a completely dark room. That took the uniformity result over our preferred 10 percent. This isn’t a big deal though; if any ambient light was present, or the signal level was anything but zero (completely black), the screen looked perfectly uniform from edge to edge.

The 436M6 will please gamers who want to avoid the high input lag inherent in most TVs. It won’t set any records in the gaming monitor category, but it is quicker than any TV I’ve tested. Most consumer displays exceed 100ms in our input lag test, so a score of 89 ms is an improvement. But we perceived a slight delay when gameplay got intense. Casual players will be fine, but more hardcore fraggers will want a dedicated gaming monitor.

The screen response of 20ms is faster than most 60Hz screens and contributes to low motion blur.

Despite a less-than-impressive input lag score, the 436M6 is a competent gaming monitor. Its quick screen draw time gave it better motion resolution than other 60Hz monitors I’ve used to game. With overdrive set to Fast (one down from the highest), the monitor maintained detail during fast mouse movements with no sign of ghosting. FreeSync worked like a charm and kept tearing out of the picture, right down to its 23Hz lower limit. Plus, games like Tomb Raider, which is coded for sRGB, looked fine with the added gamut volume.

To test its HDR chops, I hooked up my Digital Storm PC with an Nvidia GTX 1080 Ti FE GPU. Even though I gave up adaptive sync, it maintained 60 frames per second (fps) in Call of Duty: WWII in HDR mode with detail set to max. Though I was limited to 60 fps, there was no distracting tearing. The extra contrast was readily apparent, especially in highlight details, which is where HDR really shines. Storming Omaha beach was more intense since I could differentiate wet clothing from dry.

The 436M6 offered a tremendous sense of gaming immersion thanks to its enormous size. Sitting up close extended the image beyond peripheral vision, and I had to turn my head to see everything. First-person shooters were more aggressive, and flight simulations were far more realistic. As much as we like ultra-wides for that sort of thing, this monitor is better.

Prev Page HDR Performance Next Page Conclusion
Be In the Know