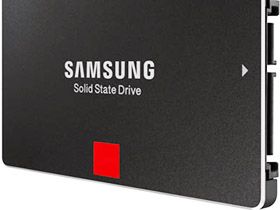 Update: Samsung is cutting prices on the 850 Pro prior to availability later this month. While the 128 GB remains unchanged, the three larger capacities will each sell for $30 less than Samsung's initial MSRP.

I liked Samsung's 840 EVO. Although it was hobbled in some ways by triple-level-cell NAND, clever features and technologies helped propel the drive to unlikely greatness. Whereas the original 840 suffered from slow write speeds, the EVO broke through with an emulated SLC-like cache, bridging the considerable performance gap between two- and three-bit-per-cell flash.

Tack on the host-side caching software (originally sourced from Nvelo) through Samsung's Magician software and the EVO flew even faster. Not that it needed much help; the EVO's TurboWrite system helped propel the 840's successor into some fairly elite company. Not bad for a supposedly mainstream SSD. Once Samsung promised me that the EVO would eventually sport the same Crucial M500-class encryption features through a firmware update, I made the call to award it my first ever (and only) Tom's Hardware Smart Buy recognition. It's the SSD I use in my personal machine, and it's also something I recommend to friends.

That's not to say I'm a huge fan of three-bit-per-cell flash, with its lower endurance, higher latency, and error-prone nature. But it certainly appears that Samsung figured how to mitigate a lot of the technology's inherent disadvantages in the EVO's case. Combining an in-house controller, custom firmware, and the company's own flash proved to be a stout combination. So much so, in fact, that I'll admit liking the 840 EVO more than the 840 Pro in most desktop applications, particularly as you factor in price. The old Pro just doesn't do much for me.

So where does that put Samsung's new 850 Pro in the hierarchy of storage?

For starters, it retains the company's MEX controller, used also in the 840 EVO. Operating at 400 MHz, it offers a considerable amount of processing power. And like other storage controllers, it employs multiple purpose-built execution cores. There's a lot going on in modern SSDs, so we've seen the hardware inside become increasingly potent. The older 840 Pro's silicon operates 100 MHz slower, and doesn't support Samsung's newest features. Still, I believe that drive's controller hardware is still similar.

The most significant differences involve Samsung's new 3D V-NAND, which represents a radical change in the way flash is designed and constructed. Last year, at the 2013 Flash Memory Summit, I attended a keynote given by Dr. E.S. Jung, executive vice president, semiconductor R&D center at Samsung. In front of a packed crowd, he raised the curtain on the company's next generation of flash technology. It's rare that a speech brings down the house at an event like FMS, but the advances promised by V-NAND have wide-reaching implications, so the reaction was understandable.

In short, we've been hearing for a while now that NAND can't advance much further (just as we've heard Moore's Law is at its end). Invariably, some technology comes along to help circumvent the limitations standing in front of progress. As it happens, NAND cells become more error-prone as feature size shrinks. The number of program/erase cycles they can withstand drops precipitously, and operations to one location in a planar array can cause unintended changes in adjacent cells.

V-NAND sees 32 cells stacked vertically in cylindrical "rods". Whereas planar NAND puts the cells adjacent together in lines, then packs multiple lines together to create one die, imagine V-NAND as stacks of Pringles cans. Where two cans join vertically, you have a word line. Connect each columnar stack of potato chips together like telephone poles, and you get the bit lines. In this way, it's still NAND as we know it. But stacking the columns higher reduces the cell-to-cell interference encountered in planar NAND.

This is how Samsung aims to continue shrinking feature size, though purportedly, V-NAND is also faster and more power efficient as well. It helps make better use of package real estate, too. Build up instead of out, and you squeeze more stuff into the same amount of floor space. That's why closets get shelves. This technology was years in the making, and now it's the centerpiece of Samsung's 850 Pro.

So that's really what this new SSD is all about. It sports the same (proven) 400 MHz MEX controller lashed to a bunch of V-NAND. With its upgrades, the 850 Pro should serve up I/O faster whilst using less power. It's not supposed to be radically quicker than the 840 Pro, but then again, it's still limited to aged SATA 6Gb/s and AHCI standards. So, there's really not much room for it go faster. I don't want to give too much of my testing away, but the real steps forward involve service times, quality, and latency. In this case, the spec sheet doesn't tell the whole story. But then, it never does...

The specifications tell us that random 4 KB IOPS at a queue depth of one are in the same ballpark as the 840 EVO. This number is almost wholly a function of NAND interface speed, so it appears Samsung's V-NAND operates at the same performance level as the EVO's three-bit-per-cell flash. That's good enough for a small bump compared to the 840 Pro.

Samsung is reluctant to provide details about its NAND, so it's difficult to comment on certain architectural features like die count. Regardless, the 850 Pro gets 10 years of warranty coverage, mirroring recent developments from SanDisk.

Lastly, Samsung claims the 850 Pro drops as low as 2 mW in DevSlp mode. We have the equipment to verify this, and we'll run the numbers. Active idle falls in the .4 W range, according to the specs. Neither figure surprises me, given this company's recent history with high efficiency.

The next step: open these things up to see what they look like inside. I love this part.