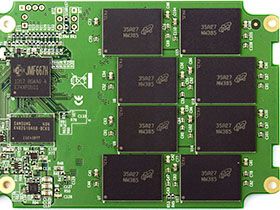 Transcend And JMicron Pair Up For The SSD340

If you're a storage enthusiast like I am, then you probably know about the third-party controller vendors and how they package their wares. For instance, Marvell won't sell firmware to go with its processors, while SandForce can't sell you silicon without the software to go with it. For certain companies putting SSDs together, this presents an interesting challenge. So many of them got into SSDs as an extension of their branded memory products. Over the years, some of them, like OCZ, developed engineering resources and intellectual property around solid-state storage. Others were content to hitch their wagons to SandForce's star as it rose to prominence, and didn't really compete in the same IP arms race.

That meant most of SandForce's partners didn't need the infrastructure necessary to build a high-quality SSD. SandForce did most of the heavy lifting by selling turnkey solutions, which made entering the business a relatively trifling matter. That company's last major revision to its controller hardware debuted in 2011, though. Three years later, there isn't anything to replace it yet.

Enthusiasts don't like to wait that long. So, the drive makers had to adjust their trajectories. Adata, for instance, reached out and got its hands on a Marvell-powered platform courtesy of Micron. In the value space, Silicon Motion is making some inroads, and that's a story we'll be telling another day.

Transcend plays the field between both ends of the spectrum, using controllers from Silicon Motion, SandForce, and JMicron. The JMF667H sits at the heart of Transcend's SSD340, a value-oriented offering designed to slug it out with drives like Crucial's M500 at 120 and 240 GB. Despite its low-cost billing, the SSD340 still manages to offer compelling performance.

How do speed and pricing come together? We'll sort that out in the lab. But first, have a look at the line-up:

Transcend Information (as it's formally called) is selling the SSD340 at three capacity points. There may actually be a 32 GB model at some point, though we don't see a need for it. Even as a cache drive, its performance would suffer with 128 Gb dies.

Worryingly, Transcend doesn't list performance specifications for anything other than its 256 GB drive. Since that's the only one I have, we cannot comment on how the other two versions will run. We'd like to see Transcend update its performance data for the other two SSD340s.

We begin our tour with the SSD340's chassis:

There aren't any screws holding the plastic exterior together, except for one under the warranty sticker. The top and bottom halves are secured largely by molded clips.

You probably won't have to worry about this, but I've taken the drive apart and put it back together several times now, and the plastic holds up well. Of course, if you open your SSD340, you void the warranty.

Transcend uses Micron's L85A 20 nm NAND in 128 Gb dies. This is more or less the same flash we saw on Crucial's M500 and more recently on the Adata SP920. It seems like the 128 Gb stuff is truly ready for prime time. In the past, only Micron/Crucial was really using it. Now it's popping up all over the place. Our 256 GB sample employs 16 placements of MT29F128G08CBCABH6-6:A. Each package sports a single die on a synchronous interface.

With 256 MB of Samsung LPDDR3 serving as data cache, the only other component to point out is the controller. This is the first time we've put our hands on JMicron's JMF667H in a retail product.

We've already covered this controller in great depth. Check out JMicron Returns: The JMF667H Controller On Four Reference SSDs for more information. In essence, though, the JMF667H is a 32-bit processor based on the ARM9 instruction set. It's a four-channel design with eight chip enables per channel, so 512 GB is really the top-end capacity right now. In a lot of ways, it's similar to the Silicon Motion SM2246EN we previewed last year, also sharing a bit with Marvell's 9188.

There is clearly an appetite for value-oriented four-channel designs, and we've seen our share( Marvell's 9175, the SM2246EN, and the new Marvell 9188). By and large, each of the SSDs we've tested based on those controllers was admirable. Now, with its 128 Gb L85A flash, Transcend's SSD340 isn't going to optimally represent what the JMF667H can do. My JMicron preview showed it takes Toshiba's A19 to really hit the afterburners. Shipping products would likely use more economical NAND, I suspected. And that's what the SSD340 gives us.

Current page: Transcend And JMicron Pair Up For The SSD340