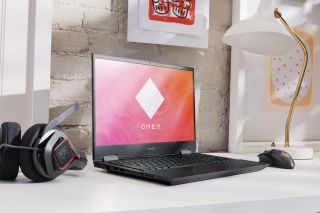 HP has given its 15-inch Omen gaming notebooks a fresh redesign with a smaller footprint, more conservative design and a new, cooler logo. Gone are the aggressive angles and slightly off-putting logo from the Voodoo days. The laptop’s also, for the first time, coming with both Intel and AMD processor options. Both start at $999.99 and are available today.

The company claims that the laptop is the smallest 15-inch gaming laptop on the market at 14.1. x 9.4 x 0.89 inches. It features a keyboard with 1.5mm travel and four-zone RGB.

The Intel model, which comes in black, can be configured up to an RTX 2070 Max-Q and 4K OLED display. The gray AMD version is stuck, for now, at a 1660 Ti at best, though an RTX 2060 configuration will be available in July, HP told Tom’s Hardware. With AMD parts, it also doesn’t go higher than FHD at a 144 Hz refresh rate.

Either way, you’ll get HP’s new thermal management. It’s promising 16% larger heat outlets than the previous generation model, with some relegated to the side. Additionally, HP has added a thermopile sensor, which is supposed to increase performance and allow for quieter, more regular fan control.

HP is also announcing a new machine in its budget Pavilion brand, the HP Pavilion Gaming 16. That laptop will start at $799.99 in June. It will come with either an Intel Core i5 or i7, up to an Nvidia GeForce RTX 2060 Max-Q, a 16.1-inch screen surrounded by small bezels on three sides and a larger touchpad. Despite not having the Omen name, it will also come with the Omen Command Center preinstalled.