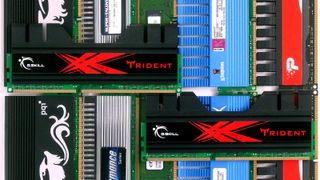 Most RAM buying guides, including ours, insist that 16GB is the value sweet spot, and for good reason: Many consumer programs tend to spill over 8GB of use, while few consume more than 16GB. Going with less than that “sweet spot” will cause some data to be written to much-slower virtual memory on your storage drive. Going up from 16GB to 32GB doubles your cost from around $60 to $120 (at current market pricing).

For most people, 16GB is probably OK, but if you’re a power user like me, more RAM is more than worth the cost, because you’re literally paying to get some of your time back.

As an editor, I end up doing a ton of multitasking, which starts with editing my own photos. When I open Photoshop, a single image spikes the program’s footprint to 300-400MB. Sure, it puts some files away after that and eventually drops to around 100MB, but that spike impacts how much data other, smarter programs are able to cache. I typically open six similar images at once to compare them before I pick one or two to edit. And while I’m editing those, Photoshop’s memory use often jumps to around 2GB.

Though 2GB is admittedly a small part of 16GB, let’s consider what other programs I’m running: I’ll typically have eight or more work-related sites open in one web browser and two or three other tabs showing the worksheets and documents that relate to my current task.

Add two or three tabs for comparing factory specs, two or three more for price engines, and even two or three for previous articles that I’m hoping to link to. My workflow is that, whenever I reach a point in the discussion that hits on any of those tabs, I bounce through them, find what I’m looking for, and pop that information into my article.

Meanwhile, I have a second browser running my social sites: Facebook, Twitter, Instagram, Tom’s Hardware forums, and all the other forums I more stealthily view take up around 2GB. And my third browser? It’s full of all the stuff that I don’t mind being linked to my webmail account, but don’t want to get ads for in my work email.

Other services? I’ve too many to list, as I even have a DVR running just to provide programming that I can view with audio at 1.5x. I can’t find a web player to do that. Skype? Ring? Check.

With all of those apps and tabs open, dumping six photos into Photoshop used to cause Chrome to panic, dumping a ton of cached images and ads that were stored in memory to the drive. After that, bumping through my tabs would result in some pages going blank and reloading, some not scrolling properly until I waited for certain ad services to reload and images to reappear. When seconds count, reloads were taking minutes from my day. Every day. And so, two years ago, I upgraded to 32GB. Problem solved.

Other reasons to install more than 16GB include the use of applications that need more than 16GB to run at full speed, including some video editing and 3D modeling software, or even the editing of poster-sized images. But my favorite reason to run 32GB on our dual-channel test systems is that this capacity currently provides two ranks of memory per channel.

A rank is the group of ICs (chips) that fill one 64-bit interface of a DIMM, so that dual-rank modules have twice as many ICs and both interfaces active. Our AMD Ryzen 3000 memory deep-dive proved that four ranks of DDR4-2800 can outperform two ranks of DDR4-3600! And while a recent review revealed a 16GB kit that contained two dual-rank 8GB DIMMs, the lower-density chips used to create those rarified modules have been out of production (to the best of our knowledge) for around two years (hence the rarity).

What’s Your Time Worth?

Whether you go with two dual-rank 16GB or four single-rank 8GB DIMMs, the fact that you’re doubling up either the number of modules or the number of ICs per module means that you’re also doubling the price. After over a year of escalating prices, this year’s memory pricing has fallen to a point below that of when I did my upgrade. 32GB kits are now available for under $120.

If you’re thinking “but that’s still twice as much as $60”, I’d first ask you what your time every day is worth. Then, understanding that you’ll probably be buying modern RAM at modern density, I’d ask how much you’ve already spent on your system to boost performance. Compared to a complete system price of at least $600, that extra $60 begins to look like a bargain.

Note: As with all of our op-eds, the opinions expressed here belong to the writer alone and not Tom's Hardware as a team.