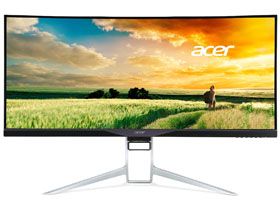 All the curved monitors we've reviewed came in large boxes with lots of protection for the delicate panel and this Acer is no different. Our sample had been shipped multiple times and was still without a scratch after traveling thousands of miles. The XR341CK comes fully assembled and only needs to be lifted out and unwrapped.

The accessory bundle includes an external power brick, HDMI and DisplayPort cables and a USB 3.0 A-to-B connector. Instead of the customary CD-ROM, Acer has enclosed a full printed manual in five languages.

The stand may look minimalist in the photos but it's made from a single piece of cast aluminum. That construction extends to the upright as well. The spring-loaded rise mechanism is encased in plastic, but the actual support structure of the XR341CK is all-metal. It just drips with high-end cred. This is one of the very few ultra-wide screens with height adjustment. You get just over four inches of range plus 25 degrees of tilt.

The control buttons are at the bottom right and point down at the desktop; they're our least-favorite aspect of the XR. They don't click as firmly as we'd like and it takes three different key-presses to bring up the OSD. After being spoiled by the joystick controllers on several BenQ, LG and Asus monitors, we keep hoping buttons like this will become a thing of the past.

The screen is coated with a typical anti-glare layer that does not produce any grain or other image artifacts. The image is quite sharp and bright even when the room lights are on.

From the top you can see the curve is subtle but certainly visible. It's not as extreme as the 2000R curve we saw in BenQ's XR3501 and you won't see any distortion in on-screen content. It is just enough to create a little greater immersion and an ideal complement to the 21:9 aspect ratio.

Here you get a great view of the cast-aluminum upright/base piece. It's one of the nicest stands we've seen included with any display. At the top is a handle that makes moving the XR341CK much easier than grabbing the panel's sides. Speaking of the panel, it's not terribly slim at nearly four inches thick.

The rear vents are arranged in a chevron pattern which is appropriate to the Predator name. Acer's logo is prominently displayed in the upper-left corner. You can see a small cable management bracket at the bottom of the height mechanism. It's very easy to use since the inputs face back instead of down.

The seven-watt DTS speakers fire down from a central location in front of the upright. They have a good deal more transparency and punch than what we're used to. We actually found them more than adequate for gaming, though the sound is a bit too polite, even at max volume. For movies we recommend headphones or larger external speakers.

The inputs are on both sides of the upright and face backwards which makes plugging in cables very easy. Just one warning though -- it's a little tricky to plug in fat DisplayPort cables to the upper input because it sits close to the edge of the jack panel. Both HDMI inputs are version 2.0 and one is MHL-compatible. DP inputs are version 1.2a and include standard and mini sizes. The bottom DP connector is an output used for daisy-chaining. To the right is the DC plug and headphone output.

The right half of the input panel includes a Kensington lock and the USB hub; it's version 3.0 with a single upstream port and four downstream ports.