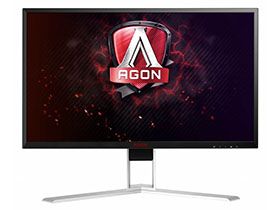 To read about our monitor tests in depth, please check out Display Testing Explained: How We Test Monitors and TVs.Brightness and Contrast testing are covered on page two.

Normally, we try to group monitors by price, size, or technology. Today, it’s all about speed. We found the fastest screens in our database and picked the most recent models for the comparison. Asus is represented by its PG258Q. Acer delivers the XB252Q and Z301C. A second AOC is here in the form of the AG271QG. Finally, we have Dell’s S2417G. All operate at high refresh rates and offer the shortest possible panel response and extremely low input lag.

Gaming monitors need to be bright enough to accommodate blur-reduction technology with its output-robbing backlight strobe. The AG251FZ omits that feature but delivers a high white level anyway, nearly 400cd/m2. Few players will need that much light, but if AOC were to add blur-reduction in the future, the panel is ready.

TN and IPS screens are about even in the black level and contrast department. We always hope to see at least 1000:1, and the AG251FZ delivers. It’s fortuitous that we could include an AMVA display here. It has almost triple the contrast of the next best monitor. Now that 240 Hz is a practical reality, perhaps manufacturers will concentrate on upping the dynamic range ante.

The backlight throttles down to a reasonable 68.9614cd/m2, which is an acceptable level for dark-room use. The black level score drops to fourth place, but only because the other screens can go dimmer. Contrast remains in third with a consistent 1002.7:1.

Calibrating the AG251FZ moves it ahead of the PG258Q by just a hair in the black-level test. The two monitors share their core panel part, so that makes sense. And we’ve lost no performance whatsoever, while the other screens drop their contrast just a little. Color accuracy gains are small, but if you can make the adjustments, we think the result is worth the effort.

The ANSI test puts the AOC back in third place, but it remains solidly above the rest of the field. Despite its old-school TN technology, the AU Optronics panel used here is a brand-new part made to a high quality standard. When coupled with its insane speed capability, it takes gaming to a whole new level.

Prev Page OSD Setup & Calibration Next Page Grayscale, Gamma & Color
14 Comments Comment from the forums
Be In the Know