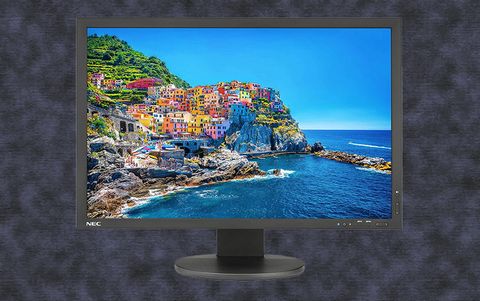 To be termed "professional," a monitor used to require an Adobe RGB gamut, which the PA243W provides. But today, we’re including DCI-P3 coverage in that standard since it’s becoming the prevalent spec for Ultra HD video content and gaming. We’ve already covered several monitors that deliver it including Dell’s UP2718Q, Acer’s PE320QK, and AOC’s U3227PWQU & C4008VU8. The NEC PA302W makes the group for both its Adobe color, as well as its 16:10 aspect ratio.

When set to 400cd/m2, the PA243W delivers a little less than its claimed 350cd/m2. The slider will flash to warn you of excessive brightness when you max it. With a mid-pack black level, the panel sports just over 1000:1 contrast, our standard of goodness for IPS monitors. The two MVA screens from AOC are far above the rest in that department, thanks to advantages in the panel type. None are as accurate as the NEC however, as you’ll see later.

NEC always features super-low backlight levels in its monitors. The control has very fine resolution, so there’s no penalty for this design choice. At the bottom of the range, contrast starts to fall off and bottoms out at 806.7:1. But a consistent 1000:1 can be maintained at 50cd/m2 and above.

We set all three color presets to 200cd/m2 to level the playing field. You can see the minimal effect of the PA243W’s uniformity compensation. It doesn’t change peak white at all and creates only a tiny rise in black level. Contrast is still a very-usable 888.2:1. This is at the compensation’s strongest setting; there are four additional options available. Our sample didn’t need any help, but the PA243W has the first practical uniformity compensation we’ve ever seen.

When ANSI contrast is this close to the sequential value, you know a quality panel is in use. This is one of the things you get for that premium price tag. Of course, a VA panel still wins this race by a mile. But among IPS screens, there are few that offer this level of intra-image contrast. The Acer is another standout in this test.