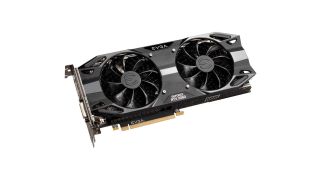 Ray tracing for chump change? Not quite, but the EVGA GeForce RTX 2060 XC Ultra Black Gaming is available for its lowest ever price on Amazon, just $309.99, making it one of the best deals we've yet seen for a new rather than refurbed RTX 2060 board.

This EVGA board doesn't stray far from Nvidia's reference specifications for the GeForce RTX 2060 chipset. You get the standard 1,365MHz base and 1,680Mhz boost clocks, plus 6GB of 14Gbps GDDR6 memory. But then the benefits of factory overclocked graphics cards are often pretty marginal and the main attraction here is the 2060 chipset at a very low price.

Of course, you get all the usual benefits of an RTX 2060 board, including 1,920 CUDA cores, a 192-bit memory bus and that defining feature, namely hardware accelerated ray-tracing.

The 2060 chipset has been somewhat superseded now by the 2060 Super, a usefully faster card thanks to its 2,176 CUDA cores, a wider 256-bit memory bus and an upgrade in render outputs from 48 to 64. But the Super comes with a commensurately supersized retail price. It'll cost you another $90, or thereabouts. That's 30-ish per cent more money, but it's nowhere near 30 per cent faster.

Anyway, this is a great deal for a standard 2060 board. How long it will last, we do not know. If you miss it, check out the rest of our graphics deals.