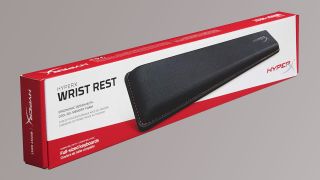 The best holiday gifts are items that your giftee doesn't own and wasn't shopping for, but can't live without once they're in use. Case in point: the HyperX Wrist Rest, an amazingly comfortable accessory that elevates  your typing game and keeps your hands comfortable all day.

If you look through most people's wish lists or ask them what they want, few would mention a wrist rest. That's because many people either don't have wrist rests or they settle for the rock hard slabs of plastic that come attached to many gaming keyboards.

Reduced from its regular price of $20 to $15 on Amazon as part of the holiday tech deals frenzy, the HyperX Wrist rest changes the game, both for gamers and for anyone who spends a lot of time in front of a keyboard. It uses a combination of cooling gel and memory foam to provide a surface that's cool and soft enough to gently cradle your wrists, but firm enough to keep them from sinking.

HyperX Wrist Rest - was $20, now $15 @ Amazon
This wrist rest not only raises your wrists for reducing strain, it’s also cozy. That’s because it’s stuffed with thick memory foam and cooling gel. Plus, it’ll stay in place, thanks to its anti-slip grip on the bottom. It’s currently selling for its lowest price.View Deal

Unlike many gifts that go unused in a drawer, a wrist rest is one that your giftee can take advantage of every single day. Even if they already have a wrist rest, the HyperX one is more comfortable than whatever they own now.

I've compared the HyperX Wrist Rest  to other gel wrests I've used and the cooling gel makes it the better choice. Its black design with red accents also looks much more stylish than any of the wrists rests I've bought at Staples over the years. In fact, this is one gift you might also want to buy for yourself.