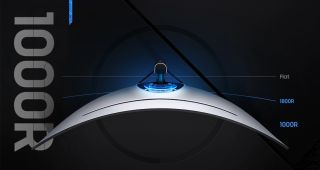 It's time to smash open the piggy bank, only to realize it isn't quite full enough. Samsung's jaw-dropping Odyssey G9 just went up for pre-order on Amazon, and it costs a hefty $1700. But, it comes with a spec sheet to match its price tag, so it may tempt you yet.

Back at CES, Samsung showed off its Odyssey G9, where it swooned us with its intense curve and wonderful image. If you're looking for one monitor that can do it all, this might just be the one.

The Odyssey G9 is Samsung's third iteration of its ultra-ultrawide monitor, essentially stitching two 27-inch panels together to form one massive 49-inch, 5120 by 1440p display. What makes it different from its predecessor are two key things -- it tightens up the curvature from 'just' 1800R to an ultra-tight 1000R (1 meter from center), and upped the refresh rate from 120 Hz to 240 Hz. The panel is also upgraded, giving incredible contrast ratios with HDR1000 support for an extreme dynamic range. Its response times is now just 1ms, too.

The first version was absolutely legendary to game on, but its 1080p resolution made it unusable for anything but gaming. Then came the second version with a 1440p resolution, which was much more balanced -- it was great for work and gaming, packing more than adequate display quality with 5120 by 1440 pixels to work on that refreshed at 120 Hz.

The new specs make the Odyssey G9 the ultimate gaming monitor, with enough pixels to be great to work on too. Sure, you'll need a rather lofty amount of GPU power to push 240 Hz onto a dual-QHD display, but the next GPU launches are nearing anyway. Besides, isn't that a price you'd be willing to pay to build a gaming setup that's this immersive?

The one thing that remains to be seen is how the panel will respond to being this curved with regards to backlight bleed. If pushed tight into the housing, blacks might become quite bright around the edges, though hopefully HDR will sort that out without you noticing.

Pre-order now, and Amazon will ship the Odyssey G9 out to you on July 13th.