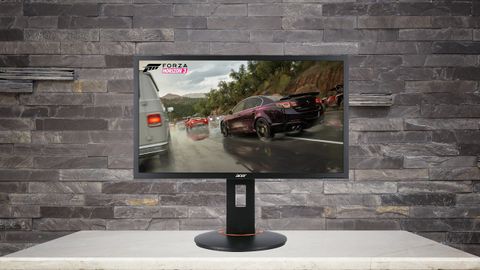 At 24 inches, you likely won’t be sharing the XFA240 with another user, but a slight offset from center won’t ruin the gaming experience.

While TN has the worst viewing angles among the three top technologies (TN, IPS and VA), it’s made improvements in the past couple of years. We could see a clear shift to green and red and a 50% light reduction when looking at the display from 45 degrees to the side. Fortunately, detail is retained in shadow areas. The top-down image looked somewhat washed out, but, again, you can still see all the brightness steps.

The XFA240 showed excellent screen uniformity in our black field test with no visible hot spots, bleed or glow. The measurements say there’s a little extra brightness in the center zone, but we could see it with the naked eye. That contributes to its solid ANSI contrast and made the overall picture look better with greater depth and saturation.

If you want the absolute bleeding edge of speed, only a 240 Hz monitor, like the Aorus, will do. But with mere 144 Hz refresh rates,the other monitors compete well with the Aorus. The XFA240 matched the other screens running at that speed with a 7ms black to white transition. At that speed, blur isn’t an issue, with or without extra overdrive in play. Can you see the difference at the 5ms offered by the Aorus KD25F? Yes, actually; but we’re talking about subtleties here. We doubt anyone but the most skilled gamers will care about that 2ms.

Input lag is also average among 144 Hz monitors. 28ms is fine for just about anyone who frags in their spare time. Again, the 240 Hz Aorus is slightly faster, but it’ll take serious gaming chops to notice the difference. We enjoyed every bit of our gameplay time with the XFA240.

Prev Page Grayscale, Gamma and Color Next Page Conclusion
2 Comments Comment from the forums
Be In the Know