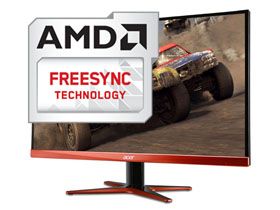 All of the monitors in today’s comparison group are capable of 144Hz operation. Two have G-Sync (AOC G2460PG and BenQ XL2420G), two support FreeSync (BenQ XL2730Z and our review subject) and the remaining samples do not employ frame rate matching (LG 24GM77 and BenQ XL2430T).

We’re always concerned that gaming monitors have enough available brightness to cover blur-reduction, which reduces output. The XG270HU is the only screen in our field without that feature, so its 367.4346cd/m2 of brightness is more than enough.

The max black level places Acer squarely in third place. That bodes well for on/off contrast, which as you’ll see below is pretty good.

The XG doesn’t quite crack 1000:1 but it comes close. We like the look of this particular TN panel. Not only does it offer a nice, punchy image, it seems to have better off-angle quality than most. You’ll see more evidence of that on page seven.

We like 50cd/m2 as a minimum value, though many users prefer 80. Acer caters to those in the latter group with an 87.9393cd/m2 result. When the lights are out, dropping the brightness bottom produces an ideal image for playing games or watching movies with no eye fatigue.

The XG270HU loses a bit of ground with a fifth-place minimum black level score. Minimum contrast is slightly lower as a result.

Minimum contrast declines only barely, and Acer retains its third-place ranking in our on/off contrast tests. This level of performance shows good consistency at all brightness levels. There’s no need to adjust anything but the backlight to your own preference. All other parameters remain stable and accurate.

Calibration drops the Acer from third to fifth place in the black level standings. These are extremely minor variations that you'd struggle to distinguish with the naked eye. And the XG is pretty accurate without calibration. So, if you want every bit of available contrast, leave the monitor at its factory settings.

There is an eight-percent drop in contrast when you calibrate. It’s a small compromise, but then again what you gain in color accuracy is equally minor. Thus, leaving the monitor unadjusted still results in an excellent image. We’re making the changes to show the XG270HU’s full potential. In the real world, though, they’re not necessary.

To our eyes, this is one of the best TN panels we’ve seen, and the ANSI contrast result backs our observation. Only the highest-quality parts can maintain a ratio close to the on/off number. It’s fortunate that the top three screens represent 144Hz (LG), G-Sync (BenQ) and FreeSync (Acer). That means you only have to choose the technology you want to support. All three offer superb contrast performance.