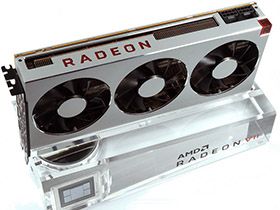 AMD does not implement a semi-passive mode, which we're fine with. At idle, the three axial fans spin between 800 and 820 RPM, operating quietly. We did, however, measure some variation in their rotational speed using a laser tachometer, despite receiving the same PWM signal. At higher speeds, they give off a slight oscillating noise since their differences fall into an audible frequency.

That floating noise isn't the worst of Radeon VII's acoustic issues, though. A peek at the fan curve makes it clear how aggressive AMD is being with Vega 20's performance. In less than three seconds, the card goes from its idle fan speed straight up to its maximum. As you can imagine, this makes for a jarring experience compared to competing solutions that ramp up slowly in response to load. In both our U.S. and German labs, test notes indicate initial alarm that something was malfunctioning.

As mentioned on the first page, we approached AMD about our findings and were told that this behavior is intended. Although Radeon VII exhibits similar maximum-load acoustic performance as the reference Radeon RX Vega 64, that quick ramp from idle to 2,900 RPM explains why the new card seems so much louder. Again, the proposed solution is a manual adjustment in WattMan. Unfortunately, any attempt to relax Radeon VII's ability to cool itself off is going to cost you sustainable clock rates, negatively affecting performance.

AMD maintains that enthusiasts care more about their frame rates than noise, and we'd tend to agree. In this case, however, Nvidia's GeForce RTX 2080 Founders Edition card doesn't require the same sort of trade-off. Bear in mind that Nvidia's reference design does cost $100 more than Radeon VII. How do the two cards size up? Let's have a look at the measured values for both products, side by side.

The 49.2 dB(A) result is based on the 2,947 RPM fan speed observed in a closed case. We applied our gaming load with Radeon VII on an open test bench in our measurement chamber and fixed the card's fans to 2,950 RPM, replicating the same conditions.

With GeForce RTX 2080 Founders Edition subjected to similar methodology, AMD's flagship ended up a full 10 dB(A) higher. What AMD asks of its cooler in order to match Nvidia's performance is not acceptable at the same price point.

Under load, Radeon VII is simply too loud. You can tune it for quieter operation if you want. But if you ran Nvidia's GeForce RTX 2080 at the same fan speeds that AMD is using, its TU104 GPU would achieve higher GPU Boost frequencies, improving its relative position. A more fair comparison would involve benchmarking both cards at the same noise levels. After all, Radeon VII is tuned for performance, ignoring power and noise, while GeForce RTX 2080 offers a better balance between all three variables.