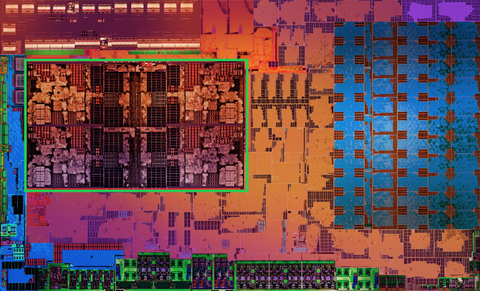 The Ryzen 5 2400G redefines our expectations for integrated graphics. It represents a great deal for budget gaming rig builders, and the ability to purchase a single chip without the added expense of a GPU adds to the value. You can tune the CPU, memory, and Vega graphics to boost performance, and compatibility with the existing 300-series motherboard ecosystem is a plus, but you’ll need to make sure the BIOS is compatible.

Gamers on a budget know that there aren't many options for affordable platforms capable of passable performance, especially with mainstream graphics cards flying off shelves and landing in cryptocurrency mining rigs. AMD aims to give those folks an all-in-one solution with a fresh wave of what the company once called Accelerated Processing Units. Although it's shying away from using APU these days, the new Raven Ridge chips combine host processing, graphics, memory control, and fixed-function accelerators, just like their predecessors. One of the best gaming CPUs you can buy, the flagship Ryzen 5 2400G comes with four SMT-enabled Zen cores and 11 Radeon Vega Compute Units that deliver up to 1.76 TFLOPS. According to AMD, it should be fast enough to run some AAA games at 1080p with low-quality detail settings.

The Raven Ridge family follows last year's Summit Ridge debut, where we were introduced to AMD's Zen architecture in CPU form, without integrated graphics. The 4.8-billion-transistor Zeppelin die allowed AMD to cram eight cores, lots of cache, and plenty of PCIe into a Socket AM4 interface. But it was only an option if you were pairing it up to a discrete GPU. Obviously, that left out the masses content with integrated graphics. Before now, those folks could either pick between Intel's modern Core processors or the aging Bristol Ridge APUs, with Excavator cores and GCN 3.0-based graphics.

Raven Ridge couldn't hit the market at a more interesting time. We're weathering the worst GPU shortage ever as cryptocurrency miners snatch up discrete cards in bulk to fuel their bullish outlooks on Ethereum and other altcoins. So, PC gamers may be willing to consider less expensive hardware to tide them over until add-in boards become more affordable. And those who consider Raven Ridge for its value may stay for some fun, because we’re finding that these processors are great for tuners and enthusiasts alike.

At least to start, Raven Ridge is available in two SKUs. Again, the flagship Ryzen 5 2400G boasts four Zen cores with simultaneous multi-threading and 11 CUs, yielding 704 Stream processors. It should be priced around $170.

There's also a Ryzen 3 2200G that comes with four physical cores (without SMT) and eight CUs (512 Stream processors) for a mere $100. AMD positions this processor for the eSports crowd interested in 720p gaming.

Both Raven Ridge models make good on AMD's promise to support the AM4 platform until 2020; they drop into standard Socket AM4 interfaces on motherboards with display outputs. Of course, existing boards need a firmware update to recognize the new models, while newer platforms will include a "Ryzen Desktop 2000 Ready" badge signaling drop-in compatibility.

AMD continues with its basic value proposition of offering unlocked ratio multipliers on all of its processors. And now you can optimize the on-die graphics, too. A refined memory controller officially supports DDR4-2933 (up from DDR4-2666) for dual-channel kits, and also touts improved memory overclocking capabilities. That's an important improvement for extracting maximum performance from an SoC heavily dependent on available bandwidth.

Interestingly, these new processors will replace the existing Ryzen 5 1400 and Ryzen 3 1200 models. Many of the notable differences between those older CPUs and the new ones are tied to a single four-core CCX (Core Complex) design and AMD's 14nm+ process. The outgoing Ryzen models employed two CCXes, leaving no room on the die for a graphics engine.

The move to a single CCX eliminates the need for communication between distant groups of cores, so memory and cache access latency is more consistent than we've seen from other Ryzen models. Then again, each CCX usually has 8MB of cache. AMD took the redesign a step further and also reduced the amount of cache on a single CCX, so the Raven Ridge chips only come with 4MB of L3 cache. Fortunately, gaming tends to prefer lower memory latency over high capacity. We'll explore this in more depth through our benchmarks, though.

AMD also tells us that its 14nm+ manufacturing process is more efficient than what came before, facilitating higher operating frequencies. Sure enough, both new Ryzen chips enjoy a 400 MHz base clock rate improvement over Ryzen 5 1400 and Ryzen 3 1200. Moreover, those older CPUs utilized a dual-core Precision Boost feature. But now the company is using a more sophisticated multi-core Precision Boost 2 algorithm that can accelerate by up to 500 MHz.

PCI Express 3.0 connectivity is still available through the Raven Ridge processors. You get four lanes dedicated to the chipset and four more that work well for connecting PCIe-based storage. An additional eight lanes are available for attaching discrete graphics, though that's unfortunately a step back from Summit Ridge-based CPUs with 16 extra lanes. Then again, we don't expect anyone to run a multi-GPU config on an entry-level platform.

Then there's the issue of pricing. Ryzen 5 2400G features the same number of CPU threads and cores at the same price as Ryzen 5 1400, but now it also includes integrated graphics. The same applies to Ryzen 3 2200G versus Ryzen 3 1200, though in that case, you'll actually pay $10 less for Raven Ridge. This puts Ryzen 3 2200G up against some of Intel's Pentium processors. Both AMD models include a bundled 65W cooler, too.

Ryzen 5 2400G and Ryzen 3 2200G are rated at 65W, just like Ryzen 5 1400 and Ryzen 3 1200. That means swapping out one CCX for a handful of Compute Units ends up being a wash for power. AMD points out that all AM4 motherboards support 95W as a basic requirement, even in the mini-ITX form factor. This leaves plenty of headroom for overclocking. We're also expecting 400-series motherboards to surface in April, along with Zen+ CPUs. Those boards will be less expensive than what we have now, and we anticipate that they'll incorporate lower power consumption, better multi-hub USB throughput, improved power delivery, and memory layout optimizations. All of the existing Ryzen models will drop right in.

As mentioned, AMD doesn't want to call its Raven Ridge chips APUs, perhaps in an effort to shed preconceived notions of lackluster performance from the previous-gen implementations. To AMD's credit, Raven Ridge is an entirely new beast. But the company now wants us to call its flagship the AMD Ryzen 5 2400G with Radeon Vega Graphics. No matter what you call it, though, the 2400G is a powerful chip for $170.