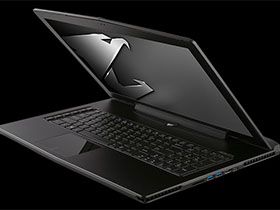 Gigabyte’s gaming notebook brand Aorus knew it'd reach a captive audience when company representatives first contacted us about a new notebook a month ago. Hot on the heels of Nvidia’s second-generation Maxwell desktop GPU, rumors of the upcoming notebook version were nothing short of amazing. Better still, they claimed they’d be able to deliver a sample by the end of September, ahead of Nvidia's introduction! We were more than happy to accept.

Then Aorus informed us of a delay. Without a mobile platform to test and Nvidia's launch day quickly approaching, we contacted all of our favorite boutique builders only to discover that everyone was facing the same issue. The earliest anyone would receive their preliminary units was October 7th. The same day Nvidia was making its announcement. Aorus was at least able to deliver on the sixth.

Dancing with the partner we brought at least allowed us to post some benchmark scores in our launch-day coverage. But there wasn’t any way we’d be able to post a complete product review in a mere 24 hours. Or even 48 hours. Our first problem was that the Aorus X7 Pro would be an SLI rig, and we didn’t have any GeForce GTX 970M single-GPU data to compare. And then there was this:

One of the mobile Maxwell architecture's most interesting features, BatteryBoost, doesn’t work in SLI. This technology replaced previous fixed-frequency battery-operated modes with an algorithm that bases clock rate on a target frame rate. By allowing a single mobile GPU to clock down to the lowest frequency capable of sustaining the target, it has the potential to save even more energy than the old fixed-frequency methods. Conversely, the same feature also allows the GPU to spin up much higher than previously allowed from battery mode, in order to reach the target frame rate when the going gets tough.

Our previous tests showed that in real-world gaming scenarios, BatteryBoost would act as a performance booster more often than as a battery-saver. Improvement claims for this technology demanded that we test the X7 Pro both in SLI and non-SLI graphics modes, and in both AC and DC power modes. By the time all of that extra testing was finished, we'd end up with a full notebook review. And so we have!