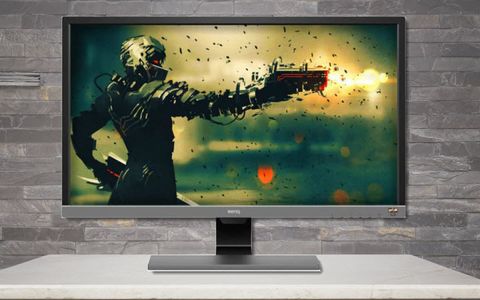 The BenQ EL2870U shines when watching movies or performing general computing. It's good for FreeSync gaming, but hardcore players will want something faster. Value-conscious buyers will have trouble finding something better. But if you're willing to pay for ultimate performance, look elsewhere.

Editor's Note: This review was originally published July 3, 2018 and was updated on November 29, 2019 to reflect pricing changes

The BenQ EL2870U is ideally suited for movie watching and general computing tasks. It's not one of the best 4K gaming monitors but performs well when gaming with FreeSync. However, hardcore players will want a faster monitor.

HDR works fine, but low native contrast limits what the panel can do. And without DCI-P3 color, it won’t offer a significantly better experience than SDR.

If you're looking for value, this monitor is hard to beat at under $500. And with Black Friday tech deals here, this monitor is currently selling for $250, its lowest price ever. But if you want ultimate performance, you’ll have to look elsewhere and spend a lot more money.

Ultra HD is more than just 3840x2160 resolution. There are plenty of monitors that offer just that, but to correctly support the latest content, you’ll need HDR and extended color support.

The EL2870U supports the most common HDR standard, HDR10, which is also found on Ultra HD Blu-ray and in streamed content. The panel has a 10-bit native color depth, which checks another box. In fact, the only thing missing here is the DCI-P3 color gamut, which is wider than standard RGB (sRGB). Since the monitor is based on an Innolux display panel released in 2014, sRGB is all the monitor can muster. Our tests revealed a little trickery engineered in to provide some extra visual punch, but we're clearly looking at an sRGB monitor here.

On the other hand, gamers will appreciate the inclusion of FreeSync, but this is limited to 60Hz, like all Ultra HD monitors.

The EL2870U eschews a heavy stand in favor of a minimalist base and upright. It ships in three pieces, and you'll need a Philips-head screwdriver to attach the upright to the panel. If you’d rather use an aftermarket arm or bracket, the device offers 100mm VESA mount holes.

The power supply is internal, so an IEC power cord is bundled, along with an HDMI cable and the user’s manual on CD.

Power consumption is fairly low at 26.2 watts when the backlight is set to 200 nits output.

The EL2870U features a prominently displayed HDR button on the front bezel. It toggles an HDR-emulation mode along with Brightness Intelligence + which varies color temperature based on your room’s lighting. That is detected by a small sensor hanging from the panel’s bottom edge.

Underneath are five control keys, plus a large power toggle that features an internal LED.

The monitor's front layer blocks reflections well without altering the screen’s excellent clarity. Some may dismiss the monitor’s twisted nematic (TN) panel, as this is a type of LCD that was prevalent in the '80s until they were improved upon with in-plane switching (IPS) panels. But when viewed head-on at a normal distance, the image looks every bit as good as an IPS screen.

A thin grill surrounds the chassis, but it only has holes up top. Larger grills on the bottom cover the two, one-watt speakers. The speakers play with reasonable volume in the upper frequencies but offer little in the way of mid-range or bass.

The upright allows just 15° back tilt and 5° forward. There is no swivel or height adjustment. The fulcrum is low, so when you rock the panel back its top moves away from you while the bottom stays put. Movement is firm and without play. The base is small but heavy enough to keep the lightweight panel from tipping over.