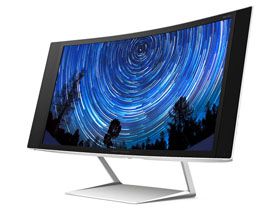 We’ve managed to review five curved displays to-date, and it seems each one offers a little something different and unique that separates it from the others.

First we saw LG’s 34UC97. It’s a solid all-around performer and works well for general tasks and business applications. It also has decent color and contrast and a slick stylish appearance. Then we reviewed Dell’s U3415W. With a factory calibration it posted the best out-of-box numbers we’ve recorded to date. It’s ideal for professionals looking for the ultra-wide aspect ratio and even without calibration, it’s ready for color-critical work.

Third out of the gate was BenQ’s XR3501. It’s an impressive 35-inches diagonal but only offers 2560x1080 pixels of resolution. But it also boasts a 144Hz refresh rate and an AMVA panel that hits nearly 2000:1 in our contrast tests. We found it superb for gaming and once involved in our favorite shooters, the lower pixel density was forgotten.

For gamers looking for signal-rate matching and WQHD resolution, we were able to test Acer’s XR341CK. It only ups the refresh rate to 75Hz but coupled with FreeSync, it delivered superb motion processing and a bright saturated picture from its IPS panel. We look forward to reviewing its G-Sync counterpart, the Predator X34 in the near future.

It’s obvious that all four of these screens offer at least one unique feature and the HP Envy 34c follows that modus operandi. By using an amazing-looking SVA panel and great-sounding DTS speakers, the Envy is a package few would not like. Our calibrated contrast ratio test resulted in an excellent 1985.8:1 figure with an almost three-dimensional picture to match. Color is pretty accurate with just a hint of extra saturation in reds; though our tests showed the error to be a minor one.

And we can’t wrap up without mentioning the speakers. Very few monitors come with a sound system that merits more than a “sounds OK.” The Envy 34c has forward-firing transducers which already gives them a huge edge in quality over the tiny down-firing units found in most monitors. They do add to the display’s width but we think it’s worth taking up a little extra space. You get a wider soundstage, greater depth and more transparency with these and the DTS-tuning enhances both videos and gaming.

The only thing that will hold back curved displays for now is the price although we’re starting to see a little progress there. At this writing the U3415W has dropped below $800 so there is hope. We know that’s still a lot for any computer monitor but screens this large will probably remain in the high-end realm for the foreseeable future.