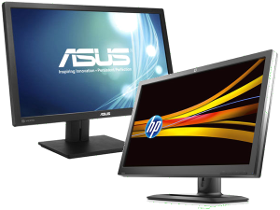 It seems that, at least for now, affordable QHD (2560x1440) screens at least 27" large are hot ticket enthusiast items. Given a screen that size, the extra pixel density is more pleasing to the eye than an FHD panel at 1920x1080. With 108 pixels per inch, you probably won’t see any dot structure at the normal two- to three-foot viewing distance.

Although QHD is still at the pricier end of the spectrum, the amount of cash required to obtain a nice-looking 2560x1440 display continues dropping. Don't believe us? Check out Auria EQ276W 27" IPS Monitor Review: QHD For $400. While other brands are still asking $800 or more, a few others are dipping into the $650 range.

We're looking at two such panels today: HP’s ZR2740w and Asus’ PB278Q. Both are IPS-based and boast high-quality fit and finish. Accuracy is a definite selling point, as is brightness. With a fairly steady stream of very nice displays coming through our labs, it’s becoming difficult to go back to anything smaller (or lower-res), and these screens typify why.

HP ships its monitor in one of the largest cartons we’ve ever seen. At least two screens could fit in the heavy corrugated box. The panel and base are kept separate by molded Styrofoam, leaving both extremely well-protected. Shippers would have to make a serious effort to damage this product! Inside the box are DisplayPort and dual-link DVI cables, along with a power cord. The power supply is internal, so there are no external bricks to contend with. Also included is a CD containing the user manual and all necessary software.

The base attaches without tools and is quite substantial. It’s made out of the same high-quality matte-finished plastic as the panel’s bezel. Ergonomic adjustments include height, tilt, swivel, and rotation. You should have no trouble setting this monitor up on any kind of desktop. All of the movements are very smooth, yet each position also feels very solid. If you want to use your own bracket or stand, the HP accepts a 100 mm VESA mount.

The bezel absorbs light extremely well. It measures 22 mm wide on the top and sides and 32 mm wide on the bottom. The image goes right to the edge (as it should) and sits behind a high-clarity anti-glare screen. Light reflections won’t be an issue with the ZR2740w. At the top center is the HP logo embossed in silver. The lower-left corner sports the model number, while the lower-right corner is home to the four control buttons. These also have a nice expensive feel to them. One of the first things you'll notice is that there is no button for the on-screen menu; that’s because the ZR2740w doesn’t have one. The only adjustment available is brightness, which is controlled by the plus and minus keys. The other two keys switch on the power and cycle between input sources.

The inputs face downwards and are clustered near the left side of the panel. DVI and DisplayPort are the only choices. The absence of both VGA and HDMI ports is a clear sign of the business-oriented intent of this product. This means no connecting Blu-ray players or other TV-type sources. A computer is the only way to display an image on the ZR2740w. Rounding out the connectivity suite are two pairs of USB ports, one side-facing and one down facing; and a type-B upstream connector. All three ports are USB 2.0-compatible.

The ZR2740w uses LG’s H-IPS panel as its core technology. This is first-generation IPS tech from 2007, back when IPS panels first came to market. Its main strength is white balance accuracy, thanks to the use of an Advanced True White polarizing film developed by NEC. Despite the age of the tech used here, the benchmark results should demonstrate that significant improvements have been made in contrast and overall color accuracy since H-IPS first appeared on the scene.

Asus’ panel is based on a Samsung PLS part; similar to the one that we recently tested in Samsung’s own S27B970D. The technology is identical to the different flavors of IPS in that the individual sub-pixels are aligned parallel to the screen instead of perpendicular. The packaging is a stout carton sporting a carrying handle, with dense, rigid foam to protect its contents. Inside are DVI, DisplayPort, HDMI, VGA cables, and a standard power cord. Like the HP, Asus’ power supply is internal. Also included is a mini-headphone audio cable for the internal three-watt stereo speakers. For documentation, only a Quick Start Guide and warranty booklet are provided. The full user manual can be downloaded from Asus’ website.

The base screws on without tools and, like the ZR2740w, it is large, solid, and more than up to the task of balancing the nearly 20-pound panel. The vertical support adjusts for height, tilt, and rotation, but not swivel. If you want to use your own bracket or swing arm, the screen accepts 90 mm VESA-compatible hardware. Everything is made from a high-impact matte-finished plastic that looks to be of high quality.

The bezel absorbs light well, measuring 21 mm wide on the top and sides, and just 25 mm on the bottom. The slightly-raised Asus logo is finished in a silver color. To the right are labels for the controls. At first glance, they appear to be touch-sensitive, but there are actually buttons beneath the edge of the panel. Their feel is nice, and they don’t require too much pressure to activate. In addition to menu navigation and power, you can cycle through sources, as well as directly access brightness controls and picture mode options. The screen itself has excellent light rejection quality and displays a sharp, bright image right out-of-the-box.

The input panel faces downwards and includes every type of connection currently available. DVI and DisplayPort are there of course. And the HDMI port is version 1.4-compliant, supporting the monitor’s full native resolution of 2560x1440 pixels. This assumes your video card outputs QHD resolution over HDMI; not all do. For audio, there are mini-headphone input and output jacks. Through these, you're able to hear the signal from both analog and digital audio sources, using either a pair of connected headphones or the panel’s internal speakers. With a full complement of inputs and included cables, the PB278Q provides the most complete package we’ve seen to date.

Before getting to the results, let's quickly go over how we test.