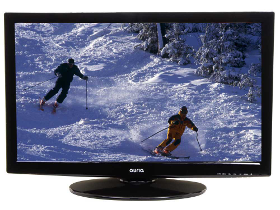 While we’re all used to the prices on our favorite technology dropping as new and better products hit the market, what you pay for an LCD panel falls a little more slowly than most other components. QHD (2560x1440) is one of the highest resolutions available on the desktop. And even though QHD monitors have been available for several years, their prices remain grossly higher than equally-sized FHD (1920x1080) screens.

With most QHD screens priced around the $800 mark, Auria offers its EQ276W at a paltry-by-comparison $399. Recalling the old adage, “you get what you pay for,” we wanted to track one down, run a full battery of tests, and determine whether the company compromises anything in its quest to enable 2560x1440 for less than $400.

IPS (in-plane switching) panels are currently manufactured by LG and Samsung. The latter calls its technology PLS (plane-line switching), but the principle is the same; individual sub-pixels are aligned parallel to the screen instead of perpendicular. The benefit is increased color accuracy, more efficient light transmission, and lower power consumption. The problem of reduced contrast seen in early IPS panels has been mostly eliminated. In fact, many IPS monitors available now boast significantly higher contrast than their TN-based counterparts.

Auria uses LG’s IPS panel as the basis for its EQ276W. At the time of writing, the only place to buy this display is Micro Center, where it can be purchased online or in-store. While there are occasional group buys for the EQ276W on various forums, purchasing this way means that you risk accepting the product as-is, with no support. Fortunately, Micro Center honors the one-year manufacturer’s warranty and replaces monitors with dead pixels.

Our sample arrived in a sturdy box, with medium-density flex foam protecting the panel and base. The power supply is a large brick with a detachable power cord. For connectivity, dual-link DVI and DisplayPort cables are included. In addition to those inputs, you also get an HDMI port and a headphone output jack. There is no separate audio input (apart from the signal carried through an HDMI connection) or USB ports. All of the connectors face downward, and are clustered near the center of the panel. The vertical support makes it a bit difficult to plug cables in; you'll have an easier time if you remove the stand hardware first.

The base snaps to the panel’s back support and adjusts for tilt and swivel. The screen sits very low on the desktop (less than two inches off the surface). So, unless your desk is unusually tall, you’ll have to tilt the screen upward to achieve the proper angle. It’s unfortunate that the stand has no height adjustment. On the plus side, all the hardware is removable so you can use a standard 75 mm VESA mount if you want to attach the EQ276W to a swing arm or wall bracket.

The bezel is fairly wide, at 28 mm across the top and sides and 41 mm on the bottom. Instead of the now-typical touch-sensitive controls, Auria includes buttons along the bottom-right of the panel. From here, you can control menu navigation, input selection, and speaker/headphone volume. The buttons feel cheap, and require a firm push to activate. In fact, they’re so firm that the entire panel moves upward when you press them. A softer touch would have been an improvement. The screen itself has no anti-glare properties whatsoever, so you’ll need to place this monitor carefully in order to avoid reflections.