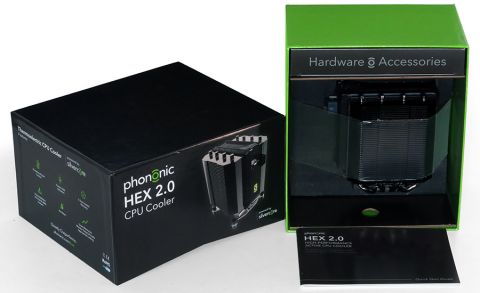 The HEX 2.0 may be the most elegant TEC-based CPU cooler we’ve tested, but users who want its combination of cooling, controllability and size will pay a premium for that additional elegance.

What It Is And How It Works

We’re not accustomed to leading an article with marketing pitches, but a quick look back at Phononic’s Indiegogo campaign shows what the company had in mind with its HEX-series CPU coolers:

Before we jump into the process and performance, a peek at the result of Phononic's design and engineering efforts shows a mid-sized, dual-tower cooler with USB and PWM cables, short standoffs for LGA-2011x, longer standoffs and a motherboard brace for LGA 115x, and AMD rectangular-pattern mounting holes, a few brackets, some nuts, and a screwdriver.

Phononic warns that the sample it sent us doesn’t have the finished texture on its plastic parts, but the sample arrived so late that sellers like Newegg already have photos of the production finish. At least the functional bits are identical to those of the cooler you can buy. But how does it work?

Thermoelectric elements move heat from one side of the element to the other, though not as efficiently as the image above might indicate. There’s some efficiency loss due to things like circuit resistance, requiring the hot side to expel more heat than the cool side removes from the CPU. Called “Peltier effect” by some physics geeks, after the person who discovered it, the thinness of thermoelectric coolers (TECs) have made possible things like compact refrigerated beverage coolers and compressor-free air conditioners. Electronic controls are meant to keep the HEX 2.0 from cooling the CPU below room temperature, thus preventing condensation around the CPU socket.

A six-pin PCIe graphics card connector powers the HEX 2.0’s thermoelectric element, though users who can’t spare one will probably be able to get away with using an adapter. Our tests showed a 40W draw for this unit. Other connectors include micro USB for the (optional) software interface and a PWM header for the cooler’s 92mm fan. Beneath those connectors is an RBG-backlit logo.

Flipping the cooling unit over shows that it’s actually two coolers acting in series. The front cooler connects directly to the CPU plate, while the rear cooler connects to the hot side of the TEC. This allows the unit to operate with the TEC off under low heat loads and on as things heat up. This split sink design also prevents the hot TEC cooler from working against itself. Hmm, that sounds familiar. Phononic illustrates the process.

The HEX 2.0 fan cover is hinged at the top and latched at the bottom. Flipping it open allows the fan to drop out, revealing two spring-loaded screws and another PWM connector for the included 92 x 25 mm cooling fan.

Short standoffs screw into the LGA 2011x bracket, or long ones into the included support plate, depending on your CPU interface. Cross brackets top the standoffs and are secured with nuts.

The cooler then screws onto the cross brackets, using springs to maintain proper contact pressure between the HEX 2.0’s polished base and the CPU's integrated heat spreader.

Did you notice the arrow in the above image? It dictates direction of flow, as the cold side of the TEC element connects to the forward cooling tower, and the hot side of the TEC element connects to the rear cooling tower. It also dictates that the cable connectors will occlude the top slot of some motherboards. Builders who are forced to rotate the cooler for additional card clearance should be ready to flip their rear fan from exhaust to intake, and make any other needed changes to balance airflow (up to potentially making their entire case flow back-to-front).

Only 4.9” tall and 3.4” deep, the HEX 2.0 provides exceptional component clearance on three out of four sides.

Although the unit is able to function without software, HEX 2.0 Dashboard can set the cooler into one of three operational modes. Its “Standard” profile is meant to keep the base at, or slightly above, ambient temperature; “High Ambient” mode increases the TEC activation temperature to further reduce condensation risk in extremely humid environments; and “Insane” mode lowers the activation temperature while increasing condensation risks. Users can also search for new firmware from the applet, and change the logo backlight color.

Current page: What It Is And How It Works