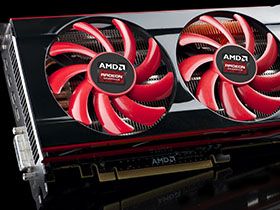 Time flies. We published AMD Radeon HD 7970: Promising Performance, Paper-Launched almost a year and a half ago. The graphics card market was quite a bit different back then. AMD’s virginal Graphics Core Next architecture made its debut against Nvidia’s Fermi-based GeForce GTX 580, absolutely blowing the company’s own Radeon HD 6970 out of the water in the process.

And a dual-GPU card, based on two of the 7970’s Tahiti GPUs was rumored to be right around the corner. We waited. And we waited.

Of course, in the 12 months that followed, no official Radeon HD 7990 surfaced. Rather, board partners tentatively dipped their toes into that high-end space. PowerColor got out ahead of the rest with a dual-Tahiti offering that consumed three expansion slots, required three eight-pin auxiliary power connectors, and screamed like a banshee any time we applied a load to it. HIS followed suit, giving us exclusive access to a couple of prototypes before withdrawing its plans to ship a dual-GPU solution altogether. Finally, Asus threw its hat into the ring with a liquid-cooled card of its own, as obscenely-priced and limited as it was. We looked at all of them in Asus' ROG Ares II: Four Dual-GPU Graphics Cards, Compared, eventually coming to the conclusion that Nvidia’s GeForce GTX 690, while a bit slower in our benchmarks, made more sense than any of the Radeons.

Challenge accepted, AMD said. Today we have a real, actual Radeon HD 7990, straight from the company’s own product team. It’s a dual-slot card. It only requires two eight-pin power connectors. And—brace yourself—its fans spin quietly. That’s not to say the 7990 is silent, but more on that later.

Hold Nothing Back In The Name Of Performance

Stripped down to its bare PCB, the Radeon HD 7990 consists of two Tahiti GPUs, each surrounded by 3 GB of GDDR5 memory and connected by a PLX Technology PEX 8747 switch.

The graphics processors are complete—AMD doesn’t disable any of their resources, so each brings 2,048 Stream processors to the table, along with 128 texture units, 32 ROPs, and an aggregate 384-bit memory bus. The company even sets the GPUs to operate at 950 MHz, with a 1 GHz boost state. That’s a little faster than the vanilla Radeon HD 7970, and a bit slower than the later GHz Edition version, which starts at 1 GHz and accelerates to 1.05 GHz.

Nestled between the two 4.3 billion-transistor chips is that PEX 8747 switch—the same one Nvidia uses to enable inter-GPU communication on the GeForce GTX 690. The 48-lane, five-port device is manufactured at 40 nm and is PCI Express 3.0-capable. So, it attaches to each GPU through a 16-lane link, and then to the host interface with an additional 16 lanes.

All of that hardware is used to enable up to five simultaneous display outputs, one of which comes from dual-link DVI and four of which get exposed through mini-DisplayPort connectors. In comparison, Nvidia’s GeForce GTX 690 can only do four monitors in a three-plus-one configuration. Five screens in a 5 x 1 arrangement make far more sense to productivity-oriented enthusiasts.

At least based on its raw specifications, the Radeon HD 7990 is technically closer to two 7970 GHz Editions in CrossFire than GeForce GTX 690 is to two 680s in SLI. And given the massive performance boosts we’ve seen from AMD’s driver team over the last year, the paper promise is a compelling advantage that should make this the fastest dual-slot graphics card in existence. Now, what about the rest of the board’s vitals?

Next Page Much-Improved Acoustics, With One Nagging Issue
131 Comments Comment from the forums