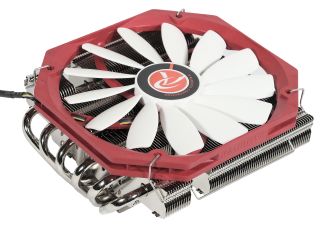 We recently tested Raijintek's Ereboss CPU cooler, which was also the company's first CPU cooler, period. That one was a massive tower cooler that left us with a good impression, particularly for low-fan RPM applications. We’re now taking a look at how Raijintek fares in the ITX CPU cooler market.

Raijintek is sticking with Greek mythology for nomenclature. Its first CPU cooler was the Ereboss, named after the ancient Greek god of darkness. The second one is named after a titan.

That choice of naming might raise eyebrows, since this heat sink is quite the opposite of a titan. Its advantage comes from a low, flat profile, which stands just 6.8cm tall with the fan already installed. So long as your motherboard can accommodate it, the Pallas becomes ideal for high-performance mini-ITX platforms.

Raijintek's sink offers six 6mm heat pipes, which should be sufficient to keep even enthusiast-oriented CPUs cool in confined spaces. And while it might look a lot like Thermalright’s AXP-200, there are some significant differences. The Pallas is 5mm shorter than the current segment leader. It also has more fins that are closer to each other and shaped differently. You should be able to find it for sale online for just under $40.