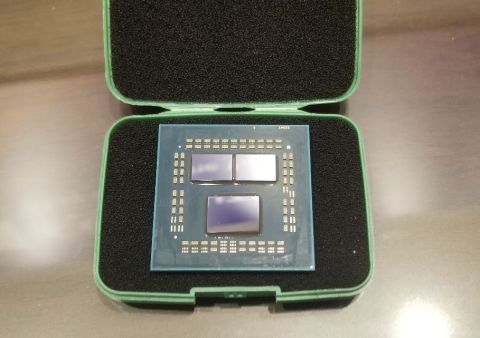 AMD's Precision Boost Overdrive (PBO) is a boon to enthusiasts with its adaptive overclocking approach, and it's making its way from the Threadripper platform to all of AMD's Ryzen 3000 processors. The software allows the processor to communicate with the platform to modulate performance based on the motherboard's power delivery subsystem and thermal dissipation capabilities.

Motherboard vendors define the power limits for their boards and are developing custom profiles that support a new Auto OC feature. This new feature grants you some control over the maximum attainable boost clocks by allowing you to add up to an extra 200MHz to the maximum boost clock, but it isn't guaranteed that the processor will reach those speeds at all times, or under all conditions. Instead, the processor will still respect the limits imposed by the motherboard maker. AMD says that Auto OC is designed to improve performance in single-threaded workloads, while PBO boosts heavily-threaded applications. In either case, you can toggle both settings simultaneously for the best of both worlds.

Due to time constraints, we tested the Ryzen 9 3900X and Ryzen 7 3700X with both automated overclocking features activated instead of with a manual all-core overclock. Several motherboard vendors have told us that overclocking headroom is extremely limited on the Ryzen 3000 processors, and that exceeding the boost clocks, or even meeting them, isn't possible for all-core overclocking. Our resident overclocking expert Allen 'Splave' Golibersuch has also spent time with early Ryzen 3000 samples and was unable to break the 4.1 GHz barrier without sub-ambient cooling.

In either case, the combination of PBO and AutoOC yielded improvements in some applications, but wasn't as impressive with the Ryzen 7 3700X as it was with the Ryzen 9 3900X. In some cases, the boost confers no benefit for the Ryzen 7 3700X in our application testing, and on a few occasions, we see performance regressions in lightly-threaded workloads compared to the stock configuration. We tested with multiple motherboards and met with the same result, which could boil down to the quality of our sample or motherboard firmwares. As with most processor launches, motherboard firmwares are still a work in progress, so there is hope that the situation will improve. We'll update our results when a fix becomes available, but we did encounter this issue the night before NDA lift, so hopefully a fix will come soon.