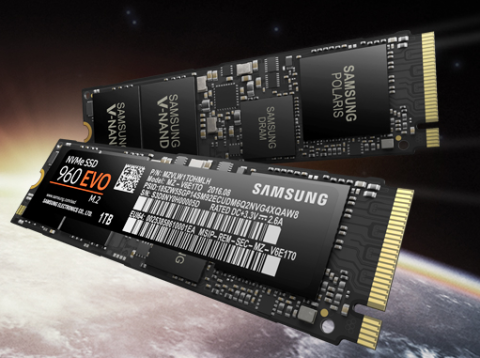 The Samsung 960 EVO 1TB NVMe SSD is an attractive alternative in a category dominated by expensive products that often have more bark than bite. Don't expect any more high-capacity value-focused NVMe products anytime soon. The 960 EVO is the best you will get in 2016 and early 2017.

Update: We've updated our original review, which included the 1TB and 256GB capacities, by adding the results and analysis of the 500GB capacity 960 EVO.

Samsung's EVO series has dominated the consumer SSD market for the past several years. The series has balanced performance and price, but NVMe is an industry-wide reset. Today we see if Samsung will dominate for another product generation.

The Samsung 960 EVO is the mantle in the NVMe room. In many ways, the EVO series has historically been the focal point because they are the SSDs by which we judge every other drive. The EVO series is never the fastest, and it isn’t even the cheapest. Samsung continues to position the EVO right in the middle, and this is by design. The company is the only SSD manufacturer to make a purpose-built mid-tier product. The strategy is just as complex as it sounds. Users gain a great deal of performance for a few dollars more than entry-level products. If we separate the market into four tiers, the EVO series pricing fits right in the middle, but the performance is 3/4th of the way up the scale. Samsung's 3D TLC V-NAND sells for the same price as other NAND manufacturer's planar (2D) 2-bit per cell (MLC) flash. To put it simply, you get more for less; the EVO is a true bang-for-your-buck product.

The strategy worked well for Samsung with performance-limited SATA products, but NVMe is the top-fuel class. The protocol runs on the high-performance PCIe bus, which doesn't have an effective ceiling for today's consumer flash technology. The EVO series utilizes 3-bit per cell (TLC) NAND flash that performs well enough to hide behind the limited SATA bus, but we easily see the limits of the technology over the PCIe bus. For the EVO to continue as the industry standard, Samsung has to mask the native TLC performance. That is very difficult without the SATA performance constraints, especially when other companies are chasing it with faster MLC flash. That sets the stage for an interesting battle between the SSD giant trying to maintain a leadership position and every other company that had to fight for market share scraps over the last five years. NVMe opens the door for the competition, but the EVO is still the bouncer holding the rope.

The 960 EVO will appear first in three capacities that range from 250GB to 1TB. The initial release ships with 48-layer V-NAND using 256Gbit (32GB) die for the two largest capacities. The 250GB model uses Samsung's older 32-layer flash with 128Gbit die (16GB). We expect the series to grow when Samsung releases 64-layer V-NAND with 512Gbit (64GB) die in 2017. For instance, the 850 EVO that we recently tested went from a 1TB ceiling to a massive 4TB as NAND density increased.

Samsung’s 5-core Polaris controller that came to market in June on the OEM-specific SM961 NVMe SSD serves as the heart of the 960 EVO. We first learned about the Polaris controller in early 2016 when Samsung held a small briefing for Asian OEM customers in Japan. We didn't have many details about the controller until last month when Samsung hosted storage media in South Korea for the unveiling of the retail 960 series.

Samsung publishes the expected speeds-and-feeds data, but most of the measurements are dependent on the platform and test software, so the results are open to interpretation. Samsung achieved the extremely high sequential performance, which reaches a maximum of 3,200 MB/s read and 1,900 MB/s write, under conditions that are unrealistic with today's software applications. Samsung also publishes queue depth one (QD1) performance specifications that it generated using a Z170 motherboard. We crushed Samsung's QD1 numbers using an ASRock Z97 Extreme6 motherboard with a direct-to-CPU PCIe M.2 channel. There is such a wide delta between Samsung’s published data and our measured performance numbers that we list the claimed performance here, but focus on our test results later in the review.

Samsung attacked thermal throttling from several angles. The Polaris controller runs cool during general desktop use, but it has a high thermal ceiling. Samsung highlights the thin copper strip that it embedded in the 960 EVO's label, but we have our doubts about its effectiveness. For what it is worth, there is a thin copper strip between the adhesive layers and printed layer on the label. The company placed several copper layers under the black paint, and the printed circuit board also features a larger, thicker copper layer that is in closer proximity to the heat source.

Throttling seems to occur in stages to minimize the impact on the user experience. The 960 EVO can operate a full 16 seconds longer than the 950 Pro before the dynamic thermal guard (DTG) triggers and reduces performance to maintain a safe thermal envelope. That allows 60% more data to transfer, which is a full 253GB of data during sequential reads on 512GB-class products.

We also received Samsung's NVMe Driver 2.0 with the 960 EVO. We know very little about Samsung, or any other company's, custom NVMe drivers. We know that installing Samsung's driver clears the high hurdle of Window's data flushing command, which increases data write performance. The driver also increases performance beyond what Windows provides with the flush limit turned off. We cover the driver in more detail later.

The 960 EVO supports full disk encryption, but only with Trusted Computer Group compliant software. The 960 EVO does not currently support Microsoft's eDrive, but Samsung is considering adding support. The 960 EVO would not be the first Samsung retail product to ship without eDrive support initially, but then add the feature after retail products arrived on the market.

Samsung made extensive changes to its TurboWrite technology. The 960 EVO utilizes Intelligent TurboWrite, which is Samsung's next-generation version of its SLC buffer algorithm. The large overprovisioned area (i.e. 256GB raw capacity to 250GB user capacity) provides the 960 EVO with some flexibility. The EVO features an SLC buffer with a fixed size that can expand under certain conditions. The amount of data on the drive and the previous workload contribute to the buffer’s ability to expand and absorb an additional amount of incoming data.

Samsung lists the sequential native TLC performance and QD1 measurements in its specifications. Other manufacturers often hide these values from users. There is a wide gap between the 250GB drive’s 300 MB/s native TLC speed and the large 1TB drive’s 1,200 MB/s.

Samsung targets the mainstream market with the EVO series, but it will have a tougher time with NVMe than it had with SATA-based products. The 960 EVO starts out at $129 and moves to $249 for the 500GB model. The top 1TB capacity tips the price scale at $479. We will analyze Samsung's MSRPs and examine other products on the market in the conclusion.

Samsung gives you access to two pieces of software that you can download from the company's website. The first is Samsung's Data Migration Tool that allows you to clone the data from an existing drive to the new EVO. The second is a little more mystical.

Samsung's newest Magician software is still missing. We expect the latest installment with new features to hit the Samsung website in December. We don't have a confirmed date, but we are aware of the new features. The Magician software will enable the normal management tools for the new 960 Series, but Samsung also added new security features. The software includes a Secure File Erase feature, which adds secure deletion for individual files, and Magic Vault, which creates a hidden partition on the SSD for data storage. We will cover both in more detail when Samsung releases the newest version of the software.

Samsung ships the 960 EVO series from the factory with a three-year limited warranty. Samsung, like all SSD vendors, also limits the warranty by endurance. The 960 EVO 250GB absorbs up to 100TB of data; the 500GB model supports up to 200TB, and the 1TB includes 400TB.

Samsung returns to using the orange accent color that it paired with the 840 Pro series. Is Samsung trying to tell us something?

Color aside, the package hasn't changed much since the 950 Pro that began shipping last year.

We talk quite a bit about the major components that make up an SSD, like the controller, DRAM and flash, but we largely ignore the secondary components. Samsung's vertical integration strategy includes manufacturing many of the other components, too. The M.2 form factor constrains the amount of PCB real estate the designers have to work with. You can see the space between each component is much closer than what we typically see on a 2.5-inch SSD. Many of the secondary components are so small we can't even tell what they are, or what function they serve.

The 960 EVO fits all of the components onto a single side of the PCB. That doesn't seem as impressive after reviewing the 960 Pro 2TB with four NAND packages and a controller wedged together, but the EVO is only the second single-sided NVMe 1TB SSD to hit the market (960 Pro being first). All three capacity EVO SSDs are single-sided, but other companies have already released single-sided models in the lower capacities.