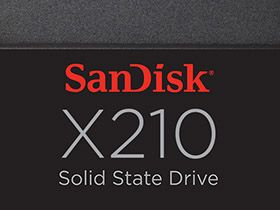 In some ways, SSDs are mysterious little devices. Filled with closely guarded secrets, there are inner workings we'd like to understand better, but probably never will. For instance, much of the validation process is privileged, particularly when it comes to the OEM units supplied to companies like Dell and Lenovo. Nevertheless, it remains a critical step, if only because it affects an end user's confidence in a (relatively) new storage technology. When SSDs start failing, people start losing faith in them. And that's notoriety that can't be made up quickly.

SanDisk's new X210 series is much like the Extreme II with reform school training to get it through a stricter validation process. Aimed at higher-end mobile users and entry-level server environments, most X210s will start life in a system where only carefully-chosen SSDs are allowed to operate. That's not an easy position to achieve. OEMs have their own standards for reliability, and if you're going to guarantee that a drive works in multiple makes of multiple vendors' machines, you want to be darned sure all of those sales aren't coming back as returns.

And that's the big impetus behind SanDisk's X210. The platform is incredibly similar to the company's other offerings, pairing 19 nm eX2 Toggle-mode flash with Marvell's highly-regarded flash controllers. Where this SSD sets itself apart is in its firmware. Having passed through a gauntlet of eight different OEMs' validation processes, the X210 reaps the benefit of that torture testing in the form of distinctive software.

We've spent quite a bit of time looking at SanDisk's products lately in SanDisk A110 PCIe SSD: Armed With The New M.2 Edge Connector, SanDisk Ultra Plus SSD Reviewed At 64, 128, And 256 GB, and SanDisk Extreme II SSD Review: Striking At The Heavy-Hitters. The former is also subject to strict OEM validation processes, while the latter have to pass SanDisk's in-house procedures for the aftermarket. Like its enthusiast-oriented Extreme II, SanDisk's X210 also relies on Marvell 88SS9187 silicon. Unlike the Extreme, it eschews the over-provisioned firmware for something more appropriate on the business scene.

The X210 joins SanDisk's X110, an OEM-oriented variant of the quad-channel Ultra Plus. Both drives are positioned above the U110, which uses a low-power proprietary SanDisk controller. With the X210 in its portfolio, SanDisk's OEM SATA-based offerings now encompass three separate lines.

Inside The SanDisk X210

We aren't going to spend too much time digging around under the X210's lid. It's very similar to the Extreme II we reviewed last summer, and there isn't much new to report. Do note the metal chassis cover though, which includes thermal pads to transfer heat away from the SSD's warmest components.

Four screws secure that metal cover to the plastic base, sandwiching the PCB in between. The 256 GB model we're reviewing uses all of one side for DRAM, the controller, and eight NAND packages. Each die is 64 Gb, so every package necessarily hosts eight dies.

Marvell's 88SS9187 is the same processor used in the Extreme II. You'll also find it in Plextor's M5P, Crucial's M500, and a few other mid- and high-end client SSDs. The eight-channel design supports SATA 3.1, along with optional parity-based redundancy and DevSleep. Enabling those feature depends on compliant firmware though, and Marvell doesn't provide its partners with reference software. As a result, each Marvell-based solution is different, sporting a range of capabilities. Crucial exposes partial-die redundancy in the M500, while SanDisk doesn't.

Unlike the Extreme II we reviewed last year, the X210 swaps in DDR3 memory from Micron in place of Hynix's modules. Each capacity point gets 1 MB of cache per gigabyte of on-board flash. So, the 128 GB model gets a 128 MB DDR3-1600 package.

And of course, the defining feature of SanDisk's latest drives not based on SandForce's controllers is nCache. This feature has been around in SanDisk literature for years, but its present implementation is essentially an SLC emulation and caching system. The first tier consists of volatile DRAM. The second tier is a variable MLC cache that behaves like single-level cell NAND. And the third on-drive tier includes the remainder of SanDisk's Toggle-mode flash. The benefits of nCache are mostly seen in low-queue depth random workloads, where the speedy emulated SLC memory speeds up I/O.

Incidentally, Samsung is using a not-entirely dissimilar system in its 840 EVO, as are several other vendors. It's a great mechanism for caching writes as NAND lithography leads to higher-latency flash. SanDisk uses a variable cache for catching segments, while the EVO utilized a fixed amount of flash pinned to the same physical locations. They're certainly similar methods, if not identical. SanDisk's U100, X110, X210, Ultra Plus, and Extreme currently rely on nCache.