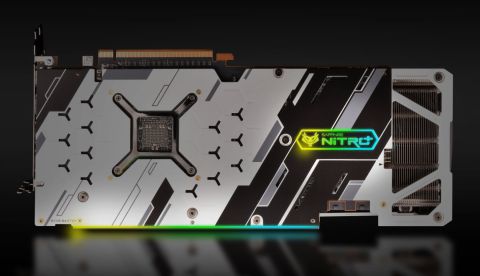 The Sapphire Nitro+ RX 5700 XT provides high clock speeds and excellent cooling, but it costs more than most competitors.

When we tested AMD’s Radeon RX 5700 XT launch card, we saw strong, mid-tier performance that beat out Nvidia’s RTX 2060 Super and often pulled even with the RTX 2070 in our tests. Sapphire’s new Nitro+ RX 5700 XT card turns up the performance on AMD’s GPU with more-robust power delivery and an advanced triple-fan cooling system that allows it to boost as high as 2,010 MHz, a gain of 5 percent over the stock card. PC fashionistas will also appreciate the Nitro+’s three different addressable RGB areas. With a current price of $469 (£493), Sapphire’s card is significantly more expensive than most of its competitors, but if you want a powerful card which stays quiet, it’s worth the premium.

The Nitro+ Radeon RX 5700 XT houses the same Navi 10 GPU found on all AMD’s reference Radeon RX 5700 XT’s. Consisting of 10.3 billion transistors and manufactured on TSMC’s 7nm FinFET process, the chip measures in at 251mm². Under the hood are four RDNA Compute Units (CU), yielding 64 Stream processors for a grand total of 2,560 ALUs. Each CU has four texture units for a total of 160.

The Nitro+ comes out of the box with 1670 Mhz base clocks, 1815 MHz AMD Game Rate clock and 2,010 MHz AMD Boost (typically an optimistic value and subject to ideal conditions). This is up from the reference model’s clock speeds of 1605/1755/1905 MHz respectively. The 2,010 MHz speed is one of the fastest available out of the box.

Another common feature between the Sapphire Pulse 5700 XT card we reviewed and the Nitro+ cards is a BIOS switch. On the Nitro+ it is a three-position switch with default (software controlled), quiet, and a performance mode and controls the fans.  The second position runs the fans at a reduced speed for quiet mode while performance ramps the speeds up. Using the default setting, you are able to change the BIOS with Sapphire’s TRIXX software (requires a reboot).

On the memory front, the Nitro+ includes 8GB of GDDR6 memory across a 256-bit bus operating at 14 GB/s. This speed is the same as reference models so it delivers the same 448 GB/s memory bandwidth. On this particular card, GPUz tells us we have Micron chips hiding underneath.

AMD’s Radeon RX 5700 XT reference card calls for a typical board power of 225W and a 600W power supply. Because this card is overclocked, it uses up to 265W and Sapphire therefore recommends at least a 650W power supply.

The Sapphire NItro+ RX 5700 XT itself measures 12.1 x 5.3 x 1.9-inches (309 x 135 x 49mm) which makes it a 2-slot+ wide card. The expansion slot below cannot be used as a card of any type will not fit. The 12-inch length takes it well over the edge of ATX size boards by a couple of inches and, though most ATX size cases shouldn’t have a problem, it’s always wise to check  your chassis specifications before you buy.

The Nitro+’s overall design is easy on the eyes with a clean and functional appearance from the front. The predominantly black and grey/silver card looks to swallow large amounts of air with its three fans as doubling as the dominant aesthetic feature. Surrounding the fans is a plastic shroud with a honeycomb pattern.  The Nitro+ comes with a solid metal back plate and is mostly silver with some black, a contrast to the front of the card. The back plate serves to protect the back of the card as well as add rigidity and additional RGB lighting.

On top of the card is an RGB-illuminated Sapphire log. When the GPU is mounted in a standard fashion (straight out of the PCIe slot - no riser cards), the Sapphire branding is presented for all to see. In addition to this, there is a frosted RGB strip on top running from the IO side to the 8-pin PCIe power connectors. The back of the card has another RGB strip hidden below the backplate that light up the Sapphire Nitro branding and shines through a couple of cutouts as well. Control over the lighting is handled through the Trixx software.

On top of the PCB, charged with managing the power and heat, is Sapphire’s Tri-X cooling solution.  Of the three total fans, two 90mm fans sit on the left and right with an 80mm nestled between them that spins in the opposite direction. The purpose, Sapphire says, is to increase air flow. In addition to the GPU, the Tri-X cooler makes direct contact with the memory and VRMs in order to keep these critical areas cool.

The primary heatsink consists of a copper base plate that makes direct contact with the die. On the other side of the copper plate are five heat pipes that snake out through the large finned heat sink. The memory actually has its own heatsink, a plate surrounding the GPU with its own fins, for dissipation. With the sheer size of the card and cooling solution, one can imagine it should keep the card running cooler than the reference blower and do so without making as much noise. The obvious drawback with axial fans and cooling is the heat dumping inside the case.

Underneath the Tri-x cooler, Sapphire uses a custom PCB and high-quality International Rectifier IR35217 controller running the 8+1 phase setup (GPU + Memory). This is a step up over the reference AMD 5700 XT, which uses  a 7+2 configuration. Sapphire also uses Black Diamond 4 chokes which the company says runs cooler and is 25% more efficient than a “normal” choke. While this may not yield a higher overclock, knowing there are some better internals makes for peace of mind.

With this review and moving forward, we’ve updated the test system to a new platform. The eight-core i9-9900K sits in an MSI Z390 MEG Ace Motherboard along with 2x16GB Corsair DDR4 3200 MHz CL16 RAM (CMK32GX4M2B3200C16). Keeping the CPU cool is a Corsair H150i Pro RGB AIO along with a 120mm Sharkoon fan for general airflow across the test system. Storing our OS and gaming suite is a single 2TB Kingston KC2000 NVMe PCIe 3.0 x4 drive.

The motherboard was updated to the latest (at this time) BIOS, version 7B12v16 from August 2019. Optimized defaults were enabled to setup the system. We then enabled the memory’s XMP profile to get it running at the rated 3200 MHz CL16 specification. No other changes or performance enhancement were enabled. The latest version of Windows 10 (1903) was used and is fully updated.

As time goes on we will build our database of results back up based on this test system. For now we will include GPUs that compete with and are close in performance to the card that is being reviewed. In this case we have two Nvidia cards from Gigabyte in the RTX 2060 Super Gaming OC and 2070 Super Gaming OC. On the AMD side, we’ll put the Sapphire Radeon RX 5700 XT Nitro+ up against a Gigabyte 5700 XT Gaming OC. Soon we’ll be adding the  ASRock 5700 XT Taichi OC+ as well.

Our list of games include Tom Clancy’s The Division 2, Strange Brigade, Shadow of The Tomb Raider, Metro: Exodus, GTA V, Forza Horizon 4, Final Fantasy XV, Far Cry 5, Battlefield V, and The Witcher 3. These titles represent a broad spectrum of genres and API’s which gives us a good idea of the relative performance difference between the cards. We’re using driver build 436.60 for the Nvidia cards. On the AMD side, we are using the Adrenalin 2019 Edition 19.9.2.

We capture our fps and frame time information by running OCAT during our benchmarks. In order to capture clock and fan speed, temperature, and power, GPUz's logging capabilities are used. Soon we’ll resume using the Powenetics based system used in previous reviews as soon as the equipment is ready.

Next Page Performance Results: 2560 x 1440
9 Comments Comment from the forums
Be In the Know