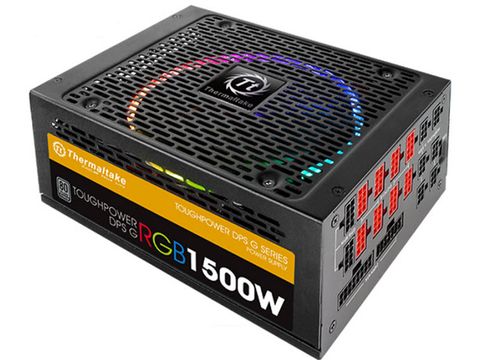 A very strong and rich featured PSU which however costs a bomb, so it cannot compete with Corsair's AX1500i which costs less. With such a high price tag we expected a fully digital platform and not an analogue one which just uses an MCU for handling the digital bridge between the PSU and the system.

We recently had the chance to review Thermaltake's Toughpower DPS G RGB 1250 W, which demonstrated good performance and earned our "Editor Approved" award. Naturally, you'd expect an even better showing from the family's flagship DPS G RGB 1500 W. That remains to be seen, though, since the TPG-1500D-T uses a different platform. While the TPG-1250D-T utilizes CWT's CST design, the TPG-1500D-T is built by Enhance Electronics, which uses a micro-controller (MCU) only for facilitating communication between the PSU and host PC. For all vital functions, classic analog controllers are used. Thus, the MCU's only advantage is the option to choose between three fan profiles.

When it comes to monitoring, the provided options are rich. But what matters the most in fully digital platforms is that all major circuits are digitally controlled, allowing for tighter control and increased adaptability according to the operating conditions. On top of that, digital control makes it possible to improve the PSU's performance through simple firmware updates. This is a major advantage you don't get from classic analog platforms. So far only a handful PSUs employ fully digital platforms, using an MCU to control all major circuits and converters. The biggest hurdle to overcome is the price premium those digital designs bear. That's the future though, so any manufacturer wishing to remain competitive must go down this path eventually.

Despite its analog foundation, the TPG-1500D-T is one of the most expensive PSUs available, and it sits atop Thermaltake's power supply portfolio. Clearly 1.5 kW of power isn't for everyone, so this unit mostly addresses high-end enthusiasts, miners, and hardcore overclockers who need a single +12V rail that delivers up to 125 A without sweating.

The specs of this unit are top-notch, including 80 PLUS Titanium efficiency, a 50 °C temperature rating for full power delivery, a complete protection set, and a long-life HDB fan. No wonder Thermaltake gives you an extra-long ten-year warranty with this product. The only downside is a very high price that puts the TPG-1500D-T in a difficult position against competitors like EVGA's 1600 T2 and Corsair's AX1500i. In this segment, a PSU has to register unmatched performance in order to offer decent performance per dollar, and there is no room for design flaws.

The minor rails have enough capacity for any modern system, while the +12V rail can deliver an amazingly high number of amperes. On the other hand, we expected a stronger 5VSB rail in such a high-capacity unit. Nonetheless, the OCP triggering point at 5VSB is way higher than 3 A, providing lots of room for any transient loads.

Ten total PCIe connectors are provided, with eight of them available at the same time along with two EPS connectors. If you want this power supply for a GPU mining rig, more PCIe connectors might have been nice. There are only eight PCIe modular sockets though, so with the current cable configuration, you cannot feed more than four high-end graphics cards with this PSU. Ideally, there should be an extra PCIe connector provided, yielding an odd number of relevant connectors since some high-end motherboards have a PCIe socket for providing extra juice to the corresponding slots.

The number of SATA connectors is increased, and the same goes for the four-pin Molex connectors. Thankfully, the single Berg connector is provided in adapter form, instead of being fixed into one of the peripheral cables. The USB header cable that connects the PSU to the PC's motherboard is too short, unfortunately, and we had to use an extender to work with our hot box. Inside of a case, the board's USB headers are closer to the power supply, so you shouldn't have a problem. Still, we'd like to see Thermaltake provide a longer USB cable.

Next Page Packaging, Contents, Exterior & Cabling
9 Comments Comment from the forums
Be In the Know