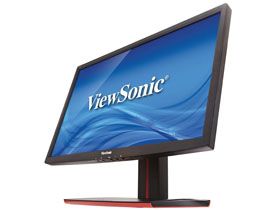 FreeSync is the least expensive way to add adaptive refresh to your gaming rig. To that end we've collected data from five other TN-based monitors that sell in the $275 to $500 range. The Asus MG278Q, Acer XG270HU and BenQ XL2730Z are QHD while the XG2401, Nixeus NX-VUE24A and AOC G2770PF are FHD. The higher pixel count typically adds about $200 to the price.

The XG2401 has light output to spare with brightness over 400cd/m2. While most of us would burn our retinas at this level indoors, it's helpful when you have to compete with incoming sunlight.

The max black level only drops to third place, which means this monitor has pretty high contrast compared to other TN and IPS panels.

This is one of the highest contrast results we've measured from a non-VA screen. We realize the product's main draw is its 144Hz refresh rate and FreeSync operation. But image depth is still important and the XG2401 has plenty of that.

The backlight goes a little low for our taste. Raising the slider to four will give you a more palatable 50cd/m2.

The Nixeus wins this contest thanks to its super-low backlight setting. The ViewSonic's black levels continue to impress, however, with a second-place finish.

Minimum contrast remains above 1200:1, which is excellent performance. TN may not be everyone's favorite technology but the latest panels offer great image quality and the XG's 24-inch size mitigates most of our viewing angle concerns.

After calibration, we see an even lower black level than before. It helps that we are able to increase the contrast slider; something we almost never do. And full detail is retained at both the shadow and highlight ends of the scale.

The final calibrated contrast result is one of the best we've recorded from a TN or IPS display. When viewed straight-on, you won't be able to tell which technology is in use. ViewSonic's choice of TN has kept speeds high and the price reasonable without any sacrifices in image fidelity.

Thanks to some of the best panel uniformity we've seen lately, the XG2401 lays down an impressive ANSI test result. Very few panels of any type can match their sequential numbers so closely. The part in use here is obviously of high quality.