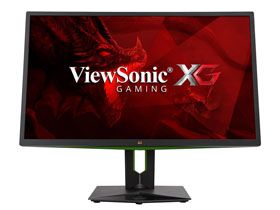 Slight flaws aside, the ViewSonic XG2703-GS is an excellent monitor. Benchmark tests reveal a few problems but they are easy to fix. And the uniformity issue we observed did not detract from real-world content in the slightest. The gameplay experience is addictive thanks to butter-smooth motion and perfect rendering. Detail stays strong no matter how fast the action becomes. When you get the framerates over 100, gaming becomes visceral and tactile. As an IPS panel, it’s priced in line with its premium competition. It isn’t cheap but it delivers an experience that makes you forget about cost. We think the XG2703-GS is worth serious consideration.

Of the two adaptive-refresh technologies, G-Sync was first to market, but its price premium made progress and acceptance a slow process. But once FreeSync became available, it seemed that every manufacturer was jumping on the gaming monitor bandwagon. Today, most company product lines include both video processing methods even though G-Sync’s roughly $200-higher price still remains.

We’ve seen a bit of evolution in the latest module that includes an HDMI input and ULMB standard on all displays, regardless of maker. But that doesn’t necessarily mean every panel will perform the same. Pixel response and overdrive implementation make a huge difference in visual clarity and motion quality. So it’s not enough to simply check the G-Sync box and go on your merry way. You have to look more deeply, and that’s what we’re here to do.

Today, the ViewSonic XG2703-GS is on our test bench. It’s an AHVA (IPS) panel with QHD resolution, 350cd/m2 brightness, ULMB, 165Hz with overclock, and a full array of gaming-oriented features.

It’s evident from initial power-up that ViewSonic has taken its time developing the XG2703-GS rather than rushing into the fray with a half-finished product. By using an AHVA panel, it falls into the luxury category rather than something used by those seeking every last ounce of performance. Though IPS offers superior image quality, it lags just a bit in speed compared to TN panels. The highest refresh rates and lowest latency numbers still belong to that technology.

Ultimately, however, it’s accuracy and gaming chops that separate the best from the rest. ViewSonic is a fairly new player in the genre, but it’s had plenty of time to avoid the mistakes made by others. The XG2703-GS is priced close to the competition, so we’ll have to dig deep and see what might set it apart. Let’s take a look.

The XG2703-GS’s packaging doesn’t scream gaming monitor. ViewSonic packs it in a generously-sized carton with plenty of space for protective foam. In fact, it does little to indicate its gaming intentions other than the application of its XG logo.

The panel, upright, and base are already assembled, so all you have to do is unwrap it and peel off a half-dozen bits of scratch-resistant plastic tape. The power supply is a medium-sized external brick. Included cables are USB 3.0 and DisplayPort. There is no HDMI, though few users would need it since that interface supports neither G-Sync nor 165Hz.

The anti-glare layer is a typical 3H-hardness plastic that is fitted tightly to the TFT for clarity’s sake. The image is quite sharp but our sample suffered from a bit of light-bleed in the corners. It only mars the darkest images and may not appear on all examples.

The bezel is narrow at 11mm at the sides and top. Multiple XG2703-GSs will fit nicely together in a two or three-screen setup. The base is wide and deep and swivels with the panel. It floats just far enough above the desk to avoid rubbing. Swivel is 175° to either side, which means you can turn the screen towards someone sitting across from you. Just the thing to do when you’ve owned someone in a frag-fest. Height adjustment is 4” with 5° forward tilt and 15° back.

The upright has a couple of neat features. Most prominent is the cable management hole which is trimmed in a lime green. This matches the subtle trim found above and below the screen. Also around back is a small flip-out hanger. It took fingernail-breaking force to free it from its closed state. In fact, we had to use a screwdriver to pry it open. Don’t snap it back all the way and it will operate a little more safely. It’s endowed with a thick green rubber pad to keep your headphones from falling off.

The back is nicely styled with a small vent and polished surfaces to offset the sea of black plastic. A 100mm VESA mount is revealed by unscrewing the upright. The tiny speakers fire backwards so a nearby wall will help reflect their thin, weak sound towards you. Take our advice and plug in a decent pair of headphones instead. More ventilation is provided along the top edge, though the XG2703-GS runs very cool, even after long gaming sessions.

Styling dictates a relatively thick side profile that is 3" deep. The right edge contains two USB 3.0 ports, and you can also see the control keys, which feel more like tiny levers than buttons. They click satisfyingly and make OSD navigation reasonably intuitive, though they won’t replace the joysticks we love so much on LG and Asus displays.

The input panel is pretty sparse, like all G-Sync monitors. There is one each of DisplayPort and HDMI only. You’ll have to use the latter to unlock all the XG2703-GS’s adaptive refresh and 165Hz capabilities. HDMI works fine for things like Blu-ray players or gaming consoles that are limited to 60Hz and FHD output. Also down here are the remaining USB ports, one upstream and two downstream.