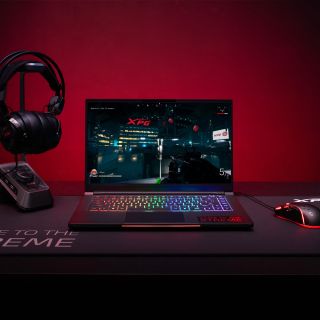 At CES 2020 in January, Adata announced plans to expand into new markets, namely gaming desktops, gaming laptops and gaming monitors. This week, Adata seemingly made good on some of that promise with the official release of its XPG Xenia gaming laptops in the U.S., Mexico and Taiwan.

The XPG Xenia taps an Intel Core i7 Coffee Lake CPU, your choice of one of two Nvidia GeForce GPUs and Adata's own XPG SSD and RAM packed into a15.6-inch chassis. However, Adata isn't the first company to try something similar.

The XPG Xenia comes in two models. One utilizes a Geforce RTX 2070 Max-Q graphics card, while the other opts for the less expensive Geforce GTX 1660 Ti. Otherwise, both models are identical. This includes the 32GB of in-house XPG DDR4 RAM, 1TB of storage and a 1080p IPS display capable of supporting frame rates of up to 144 frames per second, plus a built-in RGB "silent" optical-mechanical keyboard.

Strangely enough, Adata opted for a Core i7-9750H Coffee Lake CPU over the more recent Comet Lake release. It's interesting to see Adata makes its gaming laptop debut with an older-generation CPU and just as Comet Lake begins to hit markets in other gaming laptops at that.

However, Xenia appears to use the same Intel white-box chassis already seen in earlier gaming laptop releases, like the Maingear Element 15 and Schenker XMG Fusion 15. All of these laptops advertise similar Intel “collaborations” and use the same Coffee Lake processor.

Still, XPG is hoping to differentiate itself from the pack by including its own DDR4-2666 RAM and M.2 SSD. This might give the Xenia a slight edge in speed against the aforementioned Maingear and Schenker systems, as well as make securing parts for the supply chain easier.

The XPG Xenia is set to hit additional markets in Q3.