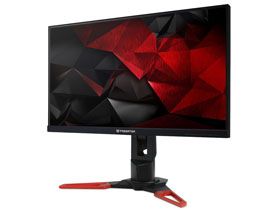 This is an excellent out-of-box result for any monitor. The RGB levels indicate a little warmth, but our deltaE chart shows no visible errors. You can leave the XB271HK on its warm color temp preset, but below we’ll make a couple of recommendations for changes in gamma and contrast.

Dropping the red slider two clicks improves the result slightly. You won’t be able to see the difference, but as always we want to show the monitor’s maximum potential for accuracy.

The top four displays here can all be used without calibration. The AOC and NEC monitors show slightly visible tints to their white points but nothing too egregious.

That tweak to the red slider has dropped the XB271HK’s average grayscale error down to 1.15dE. While not quite in professional territory like the XG2700-4K, it performs more than respectably.

Our initial gamma measurement made us believe some sort of dynamic contrast was in play. It turned out the problem comes from a contrast control that’s set too high. Most monitors we test don’t need adjustment in this area but the XB271HK benefits greatly when you drop the slider from 50 to 42.

If you only adjust Contrast the gamma will be too dark, so we also changed the preset to 1.8 from its 2.2 default setting. It seems like a large swing on paper but our measured result is pretty good. We’d prefer to see finer control with clicks no more than .2 apart, but in this case, things work out fine.

All of the screens here sport tight gamma tracking. Even a .38 range of values is a nearly-invisible error. In the XB271HK’s case, there is a slight peak at 10 percent and an equally small dip at 90. Neither of these are errors of consequence.

A .04 percent deviation represents a raw difference of .01. Our sample measured 2.21 for its gamma average. It doesn’t get much better.