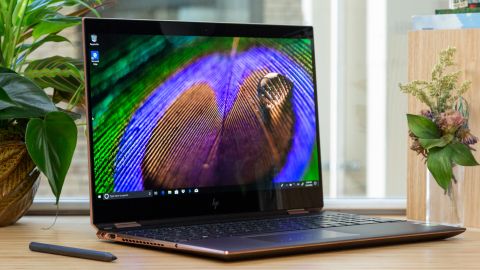 The OLED version of the HP Spectre x360 (15-inch) offers a great screen and excellent speakers, but you’ll have to live with ugly bezels and below-average battery life.

HP’s flagship 2-in-1, the 15-inch Spectre x360 ($1,329.99 to start; $1,879.99 as configured), just got a bold, bright new addition: an OLED display. That panel offers brighter, more vivid colors and deeper, darker blacks for a better image. That’s on top of an eye-turning design that the company launched this year with edges cut like diamonds and powerful speakers. But on this model with the OLED screen (which costs $150 more than the same configuration without the vivid screen), the battery life is lower than average. And such a beautiful display doesn’t deserve to be surrounded by such horrible bezels.

The HP Spectre x360 looks like a jeweler took some tools to a laptop. It has many of the trappings we’ve come to expect from the Spectre line, like its aluminum, ash-gray lid with a copper-colored HP logo and hinges. The sides and the rear of the device, also in a copper color, are angled similarly to a diamond. And, most interestingly, the two back corners have been lopped off to make room for the oddly placed power button and a Thunderbolt 3 port.

When I lifted the laptop’s lid, my first impression was that the top and bottom bezels around the 15.6-inch display are quite thick. It’s very noticeable, especially around a bright and vivid AMOLED display. The aluminum deck is the same ash gray color with gold accents around the touchpad, as well as a full-sized keyboard with a numberpad and a fingerprint reader.

The 15.6-inch, 4K IPS AMOLED display (AMOLED is a Samsung-specific variant of the OMOLED technology) on the Spectre is the showcase part feature here. It’s very bright and more vivid than competitors, which don’t have this kind of display as an option. When I watched the open source 4K movie "Tears of Steel," the blue and pink sections of Celia’s outfit jumped out from the otherwise black clothing, and green ivy growing around a brick building appeared particularly lively.

The OLED panel measured an average 483 nits of brightness on a fully white display, beating the premium laptop average of 328 nits and surpassing all of its competitors. But with OLED, brightness is also affected by the colors around it. When we used a small white box surrounded by black pixels in each spot, the screen measured an even brighter average of 512.6.

The Speectre's screen covers 258 percent of the sRGB color gamut, more than double that of the premium laptop average (124 percent) and higher than all of the other laptops we tested.

The Spectre x360 we tested came with an Intel Core i7-8565U CPU and Nvidia’s GeForce MX150 Graphics with 2GB of VRAM. That’s more than enough for the average user streaming some video, browsing the web and even playing some very basic games at low settings.

On our file transfer test, in which laptops copy 4.97GB of mixed media files, the Spectre took 12 seconds, which equates to 424 MBps. While that’s quicker than the MateBook X Pro, the premium average is 618.23 MBps, and other laptops ran even faster. (Our other configuration completed the test faster, at 565.5MBps).

On our Handbrake test, in which the computer transcodes a 4K video to 1080p, the OLED Spectre took 21 minutes and 13 seconds, just ahead of the category average and faster, again, than the MatteBook, but the XPS and other Spectre still did better.

As for graphics, the MX150 will give you a boost in Photoshop and let you play games that aren’t terribly intensive. On 3DMark Fire Strike, the Spectre earned a score of 3,265, which beats the average of 2,353 (many of these laptops are ultrabooks with integrated graphics). The MateBook X Pro was lower at 2,525, and both the XPS and non-OLED Spectre had higher scores and are capable of playing more demanding titles.

Our review unit’s keyboard offered 1.3 millimeters of travel and required 70 grams of actuation. (We measured 1.5 mm on a non-OLED unit, though that could be chalked up to manufacturing variance.) On the 10fastfingers.com typing test, I found the keys to be squishy rather than offering a click. I typed at 115 words per minute, which is pretty standard for me, though with a 4% error rate, double my usual.

The big failure of the non-OLED model was its touchpad, and that hasn’t changed here. HP isn’t using Windows precision drivers and has instead opted for those from Synaptics. Mouse movements in general feel clunky, and some gestures, like swiping three fingers up to show my open programs, often took multiple tries.

A stylus comes in the box. There are two programmable buttons on the barrel that you can customize with the HP Pen Control software. The bottom button makes the stylus an eraser by default, though I would prefer if it had an eraser on the top of the pen like Microsoft’s stylus. It offers 1,028 degrees of pressure sensitivity (interpolated to 4,096 degrees) and I experienced some rare instances of lag, but it generally responded well.

HP’s partnership with Bang & Olufsen continues to produce really strong laptop audio. I blasted the Beastie Boys’ “Sabotage” in a small conference room, with clear vocals (well, as clear as the song’s screaming vocals get) with loud guitars and snappy drums. Like most laptops, the bass could be stronger.

The HP Audio Control software offers basic controls and presets, but I don’t think most users will need to tweak them.

As I first observed on a different model of the Spectre x360, rubber foot strips on the bottom of the laptop effectively prevent the laptop from being upgraded.

While two Torx screws are easy enough to remove, the rest of the screws -- six Phillip head screws, to be specific --  are below the rubber foot strips, and you may need HP’s repair kits to get new strips on.

We couldn’t risk dismantling our loaned review unit, though the service manual suggests the RAM, which is underneath a heat shield, and the M.2 SSD could be upgraded if you crack it open.

A big, beautiful display does have its drawbacks, and in this case it’s in battery life. The laptop ran for 7 hours and 46 minutes on our battery test, which continuously browses the web, streams videos and runs OpenGL benchmarks over Wi-Fi. That’s less than the premium laptop average (8:21), the MateBook X Pro, XPS 15 and the regular (non-OLED) Spectre x360 with a more powerful processor and GPU.

Despite its 1920 x 1080 resolution, the webcam on the Spectre produces dull images. In a picture I took at my desk, the image was slightly blurry and colors (like the blue, gray and orange in my shirt) were all darker than in real life.

HP is pretty light with its pre-loaded software. The big one is HP JumpStart, which is a mix of some how-tos but also some promotions. In the programs menu, HP Command Center has a selection of thermal profiles and system information. There is some junk, like a free trial of McAfee Security, as well.

There’s also the regular stuff that comes in every build of Windows 10. This includes Fitbit Coach, Plex, Phototastic Collage and more.

HP sells the Spectre x360 with a one-year warranty.

The AMOLED display costs $150 over the exact same model without it, which isn't a huge ask for the brightness, vivid colors, and dark blacks that the display brings. Just remember that comes at the cost of unplugged longevity.

The AMOLED display version is also a fixed configuration; it doesn’t come with any other processor or GPU option. Other versions of the Spectre go up to an Nvidia GeForce GTX 1050 Ti.

If you’re spending the majority of time watching videos and want an extremely vivid display, the OLED model of the  HP Spectre x360 (15-inch) is worth considering. It’s paired with speakers tuned by Bang & Olufsen, so it’s primed to be an entertainment machine.

But that pretty screen is surrounded by thick, ugly bezels. And the battery life is lower than average, so you’ll need to keep this plugged in if you want to use it all day. The Spectre x360 with the display also is more expensive than models without it. That money could be used for more storage or other configuration options.

If you want longer battery life, you should also look at the Dell XPS 15 with very slim bezels (though it has an oddly-placed webcam) and GTX 1050 Ti Max-Q. You could also consider an alternative Spectre x360 15-inch model, which I previously found to be a pretty good laptop. That model, sans-OLED screen, can be configured with a more-powerful, GTX 1050 Ti Max-Q GPU, but its display is dimmer than I would like.