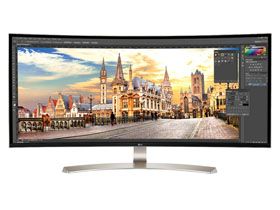 If you can justify spending $1500 on a monitor, the LG 38UC99 is hard to beat. It combines solid gaming chops with superb color accuracy, tons of screen real estate, and premium-build quality. Even the speakers are well above the rank and file. When the games are done, it’s more than qualified for productivity and color-critical work. We suspect some will see it as too expensive, but it’s a case of getting what you pay for. We think it’s worth the price.

There is nothing like gaming on a large screen. Those with projectors or big-screen HDTVs will know what I mean, but if your computing is limited to a desktop, an ultra-wide monitor can create an immersive feel in a smaller space. Of course if you have about 36" of width to devote to a display then we have a product for you. LG has gone big with 38UC99, its new 38" curved ultra-wide monitor.

At around $1500, this is without question a premium product. But you get a lot for the money here. At the core is a 38" (37.5" viewable) IPS panel capable of 300cd/m2 output. Now add a reasonable 2300mm-radius curvature. At first glance it may seem extreme, but thanks to the extra width, it reads more like a 34" screen with a 3000mm radius. There is no image distortion, and uniformity looks to be exemplary. Pixel density is 111ppi, which is almost exactly the same as a 27" QHD panel.

Since gamers are the principal buyers of displays like this, LG has included features aimed at those users. FreeSync is supported from 52-75Hz. That’s a fairly narrow range, and we’ll have to see how that lower limit shakes out in our gaming tests. Since resolution is a high 3840x1600, we’re expecting to see performance similar to the Ultra HD displays we’ve reviewed.

The 38UC99 is the first monitor we’ve tested that includes a USB-C port. It can accept video and audio signals if you have a compatible video card. Or it can be used as an upstream port, or a quick-charge jack for mobile devices. Blur-reduction, not something commonly seen in FreeSync displays, is also on the feature list. Like its G-Sync counterpart, ULMB, it can’t be used in concert with adaptive-refresh.

LG gives audio some serious attention with two built-in 10W speakers. You can also enjoy them with a Bluetooth connection to your phone or tablet. It looks like a comprehensive package that should appeal to those willing to pay a premium price. Let’s see how it measures up.

LG ships the 38UC99 in a large carton that provides adequate protection for the monitor. Our sample arrived unscathed, but the box could be a little thicker, just to add a little more foam packing. The curvature is secured by molded blocks, so it will stand up to some abuse, but when you’re mail-ordering a display this expensive it always pays to inspect upon arrival.

The stand is assembled by attaching the base to the upright with two captive bolts. Then you snap it onto the panel’s back. A small button separates the two parts if you want to use your own mounting system.

Bundled cables are finished in all white to match the monitor’s trim. They are extremely thick and of very high quality. The power supply is a large brick, also white. For video connections you get USB-C, DisplayPort, and HDMI. A USB-C to B adapter is also included. A CD contains OnScreen Control and Screen Split 2.0 software plus a full user’s guide.

The 38UC99 strikes quite a pose on any desktop and will certainly be the center of attention at the office unless everybody gets one. Be sure to measure your space before committing. The base footprint is small but you’ll need almost three feet of width to accommodate the panel. From the front, it appears bezel free when turned off, but a thin 11mm frame appears around the image when the power’s on. It’s flush with the anti-glare layer for a monolithic look. That layer will control reflections well, but take care with harsh light sources like desk lamps and windows. Color can be picked up in the screen as well, which I learned when I wore a red shirt during testing.

The rest of the chassis is made from shiny white plastic except for the base, which is matte silver. All parts are very solid and free of squeaks or wobbles. Unusual for this display size is a height adjustment. The upright is spring-loaded with ideal tension to provide smooth movement through a 4.4" range. You also get 20° backward and 5° of forward tilt. There is no swivel available.

OSD control is contained in a single tiny joystick at the bottom center of the panel. Pressing it brings up a small menu from which you can change inputs, power down. or engage the full menu. It makes navigation quick and easy. It also doubles as a power LED that emits a soft white glow.

Also on the bottom are two large speaker grills that fire downward. They boast 10W of power each and are tuned to supply extra bass. Thanks to their size, they deliver fairly well on that promise. They’ll play loud enough to satisfy without distortion. LG has definitely gone above the norm in the built-in audio department.

The curve is relatively subtle at 2300mm. That may sound extreme, but remember that this panel is wider than any other we’ve tested. You can see from our top-down photo that it isn’t too severe. There is no visible image distortion nor is uniformity affected.

From the side, the 38UC99 looks a little chunky, but that’s not surprising considering its size. Internal components are concentrated in a bulge that allows a thinner profile at the top. A small cable keeper snaps onto the upright to help tidy up your desk.

Around back is a 100mm VESA mount and a well-stocked input panel. You get two HDMI 2.0 ports plus a single v1.2 DisplayPort. The USB-C port can accommodate video and sound from an appropriately-equipped computer or serve as a quick-charge plug. Two USB 3.0 downstream ports and a headphone jack complete the connection options.