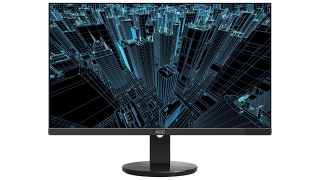 4K, IPS, 27-inch, recognisable monitor brand, and lowest ever Amazon price at $229.99. In short, get ready to push the button on this fantastic deal for the AOC U2790VQ PC monitor.

OK, the AOC U2790VQ only runs at 60Hz. It doesn't have USB Type-C connectivity with charging support. The stand only offers tilt adjustment. But then it's barely more than $200 and it's a whole lot of monitor.

For starters it's 4K, which is as many pixels as you'll get short of spending many thousands of dollars. Just as important, it uses an IPS panel rather than a cheap TN item, so colours, contrast and viewing angles will all be decent. It even offers 10-bit colour support, though we suspect the panel is native 8-bit with FRC bumping that up to the full 10 bits.

For the record, the AOC U2790VQ's 4K 60Hz native resolution is supported via both DisplayPort and HDMI inputs. It's also compatible with a 100x100mm Vesa mount and the ultra-slim bezel design makes the AOC U2790VQ suitable for multi-monitor setups. As does the ultra-low price. Dual 4K for around $450? Tempting, isn't it?

It's likewise nice to note that this is a screen from a well established brand with a reliable warranty, rather than a more obscure outfit with unknown levels of customer support. AOC is a sister brand to Philips. Together they form one of the world's largest makers of LCD monitors.

Overall, it's reassuring to find that a full 4K screen experience courtesy of a proper IPS panel can be had for so little money. If this is all you can afford, you won't feel like you're missing out. After all, the likes of 5K, 6K and 8K monitors cost literally thousands of dollars.

If the AOC U2790VQ isn't quite doing it for you, check out the rest of our 4K monitor deals.