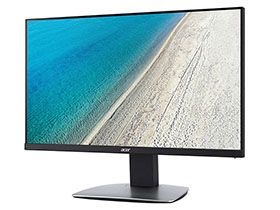 Considering the industry’s move to larger color spaces like Rec.2020 and DCI-P3, it’s surprising that we haven’t seen more wide gamut monitors coming to market. That is likely to change however, as more Ultra HD Blu-ray titles are released and users expect higher quality from streamed content. After all, most UHD consumer televisions these days have more color available. Many mid-priced sets will cover P3, and we’ve seen a couple of projectors that will also render larger gamuts.

The BM320 is particularly relevant for that reason. It displays the Adobe RGB gamut to near perfection and has equally accurate presets for sRGB and Rec.709. Acer has taken the further step of locking in a more suitable 2.4 gamma for 709, which should be of interest to video editors and post-production professionals. The only thing missing is DCI, which this display should be capable of since it has a smaller volume than Adobe RGB.

In terms of the BM320’s factory-calibrated accuracy, we have no complaints. The carton advertises a DeltaE of less than one, which it comes quite close to. Our measured results of 1.57 for Adobe, 1.70 for sRGB, and 1.92 for Rec.709 more than qualify it for use in a commercial system. We just wish there were more flexible calibration options available, if only to get it down a few more points where it would better compete with other, more expensive products.

When attempting to calibrate the User mode, we found an oversaturated red primary in the native color gamut that prevented further gains. Of course, most users will employ software solutions like CalMAN or X-Rite to get their color spot-on. OSD calibration is something we look for in high-end screens, but it isn’t a deal-breaker.

Our only other complaint is the BM320’s relatively low contrast. Granted, IPS has the smallest dynamic range of the currently-available LCD technologies but a 728.1:1 score puts it at a disadvantage to several other pro displays. And its uniformity compensation won’t help matters. Although it generates a near-perfect result in our white field test, it has to reduce output, and therefore contrast, to achieve that.

Despite a few flaws, we think the BM320 is a decent monitor. Its factory-calibrated modes are more than adequate and it’s super-easy to set up. We also like that brightness remains adjustable in those modes. Equalizing output among multiple panels in an editing bay is a real asset when working on graphics or video post-production. We also like its rugged build and solid chassis. This monitor isn’t cheap but it should last through multiple system upgrades. Ultra HD resolution should future-proof it for a while as well.

It's not easy to find a bargain in this category, especially when one requires a wide gamut. For the price, the BM320 offers good performance and accuracy. There are better displays out there but you’ll likely pay a higher premium for them. Unless you need that final 1% of performance and accuracy, Acer offers a good choice here.

Prev Page Viewing Angles, Uniformity, Response & Lag
21 Comments Comment from the forums
Be In the Know